Sound and stable labor relations are an essential foundation for achieving continuous corporate growth.
Toshiba holds labor talks with Toshiba Union, which employees may join, for practical and amicable solutions under three fundamental principles: Labor-Management Equality, Mutual Trust and Understanding, and Prior Consultation.

We share matters such as the business overview and major reorganizations with Toshiba Union and discuss changes in working conditions and other labor-related issues with the union. We will continue to hold labor-management talks in accordance with the Labor Agreement, and both parties will work together to implement COVID-19 countermeasures, promote work style reform, and address human resources measures in the era of the new normal.

Toshiba supports the principles of the Universal Declaration of Human Rights, the United Nations Global Compact, and the OECD Guidelines for Multinational Enterprises. Toshiba respects the freedom of association of its employees and ensures that they maintain their fundamental labor rights including the right to collective bargaining.
Cognizant of the fact that formation of a labor union is permitted in Japan, Toshiba Union was established consisting of employees belonging to the Company. In the Labor Agreement concluded with Toshiba Union, it stipulates that Toshiba Union has the three rights of labor (the right to association, the right to collective bargaining, and the right to act collectively). Toshiba Union was comprised of 15,088 members as of March 31, 2021, accounting for 94.7% of employees*1. The Toshiba Union belongs to the Toshiba Group Unions*2, which has a membership accounting for 93.8% of Toshiba Group employees.
We pay salaries in compliance with the laws and regulations related to the minimum wage and equal pay for equal work in each country.
In order to foster awareness of employee participation in management and contribute to their asset-building efforts, we established the Toshiba Employees Shareholding Association*3, which regularly purchases shares of Toshiba Corporation for asset building purposes. We have introduced a framework for granting restricted stock incentives*4 with the aim of encouraging officers and certain employees who are candidates for succession to the management team to share the same values as shareholders and strengthen the drive for enhancing corporate value.

Toshiba and Toshiba Union hold dialogues based on a spirit of mutual trust, mutual understanding and prior consultation in line with our basic philosophy of labor-management equality with the aim of improving labor-management relations and business operations. The management status is explained on a regular basis through a labor-management council held once every six months and labor-management meetings with top representatives from both parties. In addition, discussions between labor and management are held on a daily basis at the Toshiba Group company level and business site level.
Large-scale transfers of union members and changes in working conditions are deliberated between labor and management in advance, and these discussions are held with sufficient time given for both parties to agree.
In FY2020, we explained to Toshiba Union about preventive measures against COVID-19 and measures for employees under the new normal and implement these measures. In addition, labor-management discussions were held promptly following the declaration of a state of emergency in April 2020 due to the spread of COVID-19 with the aim of minimizing physical contact to the extent possible in order to reduce the risk of infection among employees, customers, suppliers and the local community. Toshiba Group’s domestic bases reduced the number of business days in April mainly by moving ahead days off originally scheduled for the Tokyo Olympics and Paralympics.
We will continue to hold labor-management talks on measures to be taken during and post-COVID as appropriate in accordance with the Labor Agreement. 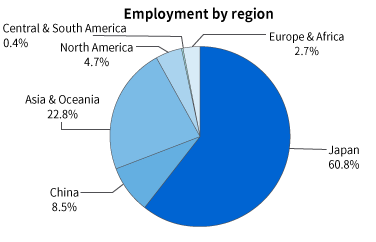 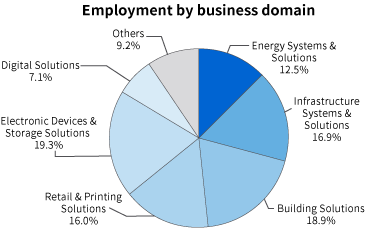