The Nakao area is a region with an abundance of high temperature geothermal steam, which is ideal for geothermal power generation. Nakao Geothermal has assessed the project’s commercial viability by conducting surveys of the hot spring sources there, well testing and environmental surveys of the surrounding area since the company was established. The company officially decided to construct a new geothermal power plant based on the results of the surveys and will plan to start construction from September 2020.

Hydrothermal water with steam used for the geothermal power plant will also be supplied to the Nakao Hot Springs Corporation. In this way, Nakao Geothermal will develop the system, which benefits both local hot spring businesses and geothermal power businesses, to promote harmonious mutual prosperity. The company will proceed with the construction of the new plant, aiming to become a “Beloved Power Plant” by earning the understanding and cooperation of the local community and those concerned.

Toshiba ESS has an extensive lineup from small to large geothermal power systems, and provides various generation systems and solutions such as hydro, solar and wind power. By using technology based on knowledge and experience cultivated over a long period in the energy field, Toshiba Group will contribute to supplying stable power and reducing the environmental impact in order to become a next-generation pioneer of the utilization of green energy resources.

Cenergy, as a member of Chubu Electric Group, is aggressively developing businesses which utilize environmentally friendly and renewable energy resources such as solar, geothermal, micro hydroelectric and biomass. Cenergy will realize the solution for tasks regarding customer environment management and will continue to work toward a “total energy service enterprise that is a step ahead of its time.” 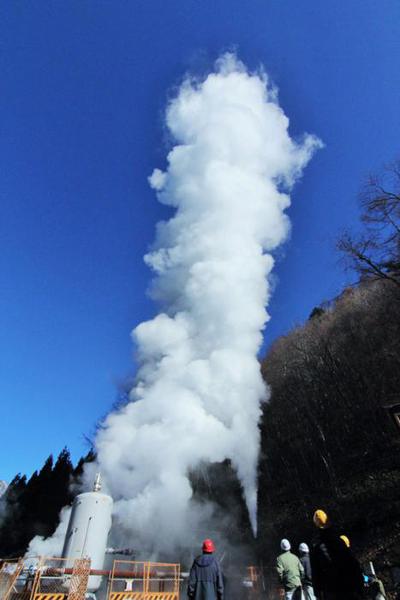 Information in the news release, including product prices and specifications, content of services and contact information, is current on the date of the news release , but is subject to change without prior notice.

Study production and use of hydrogen at New Chitose Airport

Toshiba to Reorganize for Enhancement of Energy Aggregation Businesses

Toshiba to Launch Subscription Service "Toshiba VPP as a Service"

Toshiba and Next Kraftwerke Sign Agreement to Establish Joint Venture

Toshiba to Exhibit Technologies and Products at "G20 Innovation Exhibition for Earth, Society and the Future"

J-Power and Toshiba ESS to Monitor Water Intake Levels through the Use of Low-Power, Wide-Area Wireless Technology