Plastic is destroying our oceans. Indeed, marine pollution is now a global issue, and was even taken up as one of the major issues for the G20 Summit in 2019. Maybe you’ve also noticed some of the more concrete changes happening around you, like stores getting rid of plastic straws, or grocery stores charging money for the use of plastic bags that used to be free. In Japan, there’s been rapid progress in both the public and private sectors, with a “Plastic Material Cycle Strategy” established in May 2018 that lays out a detailed roadmap for the effective use of plastic materials, instead of just treating them as waste.

One possible method to combat this issue is currently being explored near the heart of Tokyo—a cutting-edge project by Kawasaki City, called the “Kawasaki Hydrogen Strategy.” Though nowadays it’s a popular area, with a rapidly growing population, the area had, in the past, struggled with pollution. The upside to this, however, is that Kawasaki City is also home to many companies that have developed advanced environmental technologies over the course of overcoming the city’s pollution problem. The city is now working with these companies to implement and make effective use of hydrogen energy.

One of these efforts culminated in the “hydrogen hotel.” Opened in June 2018, it is the first of its kind in the world, with the aim of producing hydrogen locally, through waste plastics, and utilizing it locally as well. Here, we go behind-the-scenes to talk to the project representatives at Showa Denko K.K., which led the project, and Toshiba Energy Systems & Solutions Corporation, which provided the back-up support.

The hydrogen hotel in Kawasaki City, formally known as the Kawasaki King Skyfront Tokyu REI Hotel, was covered widely in the media when it opened in June 1, 2018. The project is an innovative one, in which the hotel creates hydrogen from waste plastics to supply about 30% of the energy the hotel needs. For the first year after its opening, the hotel is also running a test in which it recycles even the amenities used in the hotel rooms (toothbrushes, hair combs) as feedstocks for hydrogen production. Guests of the hotel are happy about the unique nature of the hotel, saying that it makes them naturally more environmentally conscious. In other words, the hotel is great for raising environmental awareness as well.

This hydrogen hotel was made possible through the technologies of Showa Denko and Toshiba.

“This project required that we link each step in the supply chain, from the waste plastics to the hotel, one by one. The important thing was figuring out how to connect this hydrogen supply chain within Kawasaki City,” said Shotaro Takayama, Planning Group Manager at the Kawasaki Plant in Showa Denko K.K., looking back on the project.

Showa Denko recycles 195 tons of waste plastics a day, and has implemented an innovative manufacturing process called “Kawasaki Plastic Recycle (PDF)(3.67MB)(KPR),” which uses waste plastics as a feedstock for ammonia production. This process recycles waste plastics into hydrogen, and the hydrogen is supplied to the hotel. To complete the hydrogen supply chain then, they needed technology to convert this hydrogen into heat and electric power.

Toshiba Energy Systems & Solutions Corporation is headquartered in Kawasaki City, and has developed—through the fuel cell technologies the company has cultivated since the 1960s—a product called “H2Rex™,” a pure hydrogen fuel cell system that converts hydrogen to heat and electric power without producing CO2. At the time of the project, the company had already implemented the system in more than 100 sites, including supermarkets and convenience stores.

It didn’t take long for the companies to realize these two technologies could be combined into something amazing. Building the actual hydrogen supply chain, however, was not so easy.

It was the first time the pure hydrogen fuel cell system “H2Rex™” would be implemented in as large-scale a hotel as the hydrogen hotel. During test operation, they found that there were much greater fluctuations in the power load from the hotel than they’d expected. They had to come up with a way to control the fluctuations.

“We went through trial and error, incorporating the knowledge we’d gained from other cases. But still, it was only a few days before the opening of the hotel that the system was finally complete. There was a bit of worry about whether we’d make it in time for the opening, but our sales and technology teams and the ones at Showa Denko really came together to work it out, and we were able to create a fuel cell system that could provide stable electric power to the hotel,” said Abe of Toshiba.

Little did they know there would be more obstacles waiting along the way.

The Tonomachi District of Kawasaki City is registered as a National Strategic Special Zone, specifically as the “Tonomachi International Strategic Zone.” It is also considered an open innovation hub, with infrastructural development rapidly underway to turn it into the world’s highest-level area for research and development and new industry creation.

“It’s true that we were lucky in some ways—the fact that Tonomachi KING SKYFRONT was a redevelopment area meant we were able to go into discussions even before the building was constructed. But that didn’t mean everything would go smoothly. To connect the hotel to the hydrogen pipeline, we needed to extend the pipeline by a kilometer. Installing hydrogen pipelines is something that’s very new, so we were having trouble moving the process forward, and there were times we felt very hopeless,” said Takayama.

The pipeline enables for the high-volume, stable supply of hydrogen, and also helps make the process more low-carbon, since the delivery will not produce any CO2 emissions. In fact, the test calculations are astounding. The entire supply chain would produce approximately 80% less CO2 emissions than the use of existing energy sources.

“Connecting a hydrogen pipeline to a hotel is an extremely rare project. We were only able to realize it by going around explaining the project to various organizations we wouldn’t normally come into contact with, like government and municipal offices, partner companies, neighborhood associations, and other stakeholders,” said Takayama.

These discussions with affiliates took almost two years. And finally, in June 2018, the hydrogen supply chain was completed.

The “Kawasaki model” for the rest of the world

And now, what are the two companies’ goals for the future?

“We want to expand this project, which we created together with all of our stakeholders. And we want to implement it in more sites—for example, in buildings that aren’t hotels. There’s so much we still need to do, like bringing more people in for tours. In recent years we’ve had a lot more people from abroad coming in for tours, and it does feel like we’re getting attention from all over the world. Nowadays it’s becoming difficult for countries to export their waste plastics, and I think each country will have to come up with their own ways to solve the issue. We think we need to promote this project in a variety of channels as a model case for a hydrogen society that could solve this kind of problem. We want to go from promoting the project one-on-one to promoting it to the public at large, showing the world that this is one way to solve the plastics problem. I think it’s especially meaningful for Kawasaki City to engage in this kind of promotion, because of the city’s struggle with pollution in the past,” said Takayama.

“With the hydrogen hotel, we were able to work with Showa Denko and produce a system that creates energy from trash. The disposal of waste plastics is now a social issue not just in Japan, but in areas throughout the world. We want to take the knowledge we’ve gained from this hydrogen hotel and provide it globally as a solution for areas struggling with this kind of problem,” said Suzuki of Toshiba Energy Systems & Solutions Corporation.

We know that this is far from the end for this project. Soon, we hope, it will fly off from its birthplace of Kawasaki City to places all over the world, a global “traveler” that will help to solve plastic issues with Japanese technology wherever it goes. 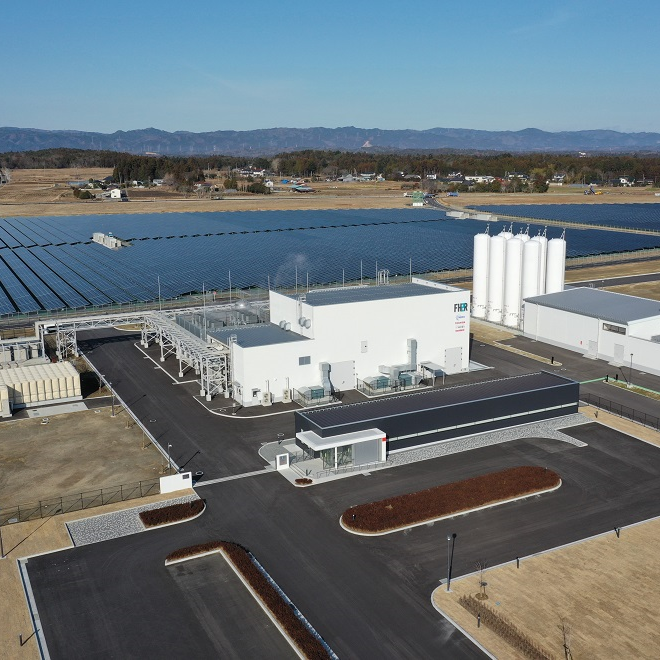