TOKYO─Toshiba Corporation (TOKYO: 6502)has developed a proof-of-concept (PoC) device for ultra-high-speed financial transaction machines that is the first in the world able to instantly detect and execute optimal arbitrage opportunities from among a huge number of currency combination patterns.

The device is equipped with Toshiba's proprietary simulated bifurcation (SB) algorithm, which obtains high-quality approximate solutions (good solutions) for large-scale, complex combinatorial optimization problems in a short time. In constantly shifting foreign exchange markets, the PoC can detect the most profitable arbitrage opportunities from among a huge number of currency combination patterns, at probabilities exceeding 90%, and issue trade orders in microseconds. This is the world's first demonstration of a device that instantly detects and executes optimal arbitrage. To promote R&D and new business development in the fintech field, Toshiba is hiring financial engineering experts(Note 1).

Toshiba announced development of its SB algorithm on April 20, and development of a processing circuit dedicated to executing that algorithm on September 11. The SB algorithm and its dedicated processing circuit together realize a new system concept, an instantaneous optimal response system. The PoC device demonstrates this new concept by applying it to foreign exchange arbitrage (Figure 1). The technology is expected to foster innovation in finance, industrial robotics, disaster emergency response systems, and other fields requiring high-speed, real-time response.

Combinatorial optimization can solve optimization problems related to innovating social and industrial systems, such as financial transactions, operation of industrial robots, and routing for logistics or power transmission, by selecting the best combination patterns among an enormous number of candidates. Solving combinatorial optimization problems at high speed with existing computers is very difficult, because the number of candidate combination patterns exponentially increases with the problem size. Toshiba addressed this issue by developing its proprietary quantum computer, the quantum bifurcation machine (QBM)(Note 4). The company also developed the SB algorithm(Note 5,6,7,8) by extending that quantum machine's theoretical basis to classical dynamics, and realized the world's fastest and largest-scale optimizations. Toshiba also proposed the concept of an instantaneous optimal response system, and announced development of processing circuitry(Note 9,10) dedicated to executing the SB algorithm that will be necessary for realization of that system.

High-speed, real-time response systems, such as those used for financial transactions or in industrial robots, must reduce total response time, including the time taken to search the external environment and to determine and execute an appropriate action. Conventional high-speed systems determine the action to take according to simple condition judgment expressions based on past experience. A system that can achieves both a real-time response and high-speed combinatorial optimization to instantly make the most reasonable judgment according to environmental changes is a new concept, one that has not yet been realized, and its implementation in society will require demonstration experiments.

Toshiba has focused on financial transactions as an activity that requires a high-speed, real-time response, and developed a PoC device that executes arbitrage transactions between multiple currencies(Note 11) in the foreign exchange market.

This device is an ultra-low-latency, all-hardware solution that implements an arbitrage trading system on a single field-programmable gate array (FPGA)(Note 12) (Figure 1). The system consists of a dedicated SB accelerator, a dedicated interface circuit, an exchange rate matrix manager, and a trading engine. It follows an academic formulation of cross-currency arbitrage(Note 11). The dedicated SB accelerator installed in this device instantly finds the most-profitable arbitrage opportunity by solving an optimal path problem in a weighted directed graph(Note 13).

The demonstration used historical tick-by-tick foreign exchange (FX) data(Note 14) in millisecond detail involving fifteen pairs of eight currencies (a directed graph with eight nodes and thirty edges). The PoC device captured market packets for currency pairs that are issued at unscheduled, extremely short time intervals (about one millisecond), and found the optimal arbitrage opportunities (a chain of currency conversions) from among a huge number of possible transaction paths (Figure 2). Order packets determined from that information and the trading algorithm were issued within 30 microseconds of the arrival of the market packet (Figure 3A). This response time is much shorter than that of exchange fluctuation timing (about one millisecond). Furthermore, the likelihood of finding the most profitable arbitrage opportunity among all possible transactions was 90.96%(Note 14). In cases where at least one arbitrage opportunity with positive profitability (profit rate exceeding 1.0) exists, the probability of detecting one of the profitable opportunities reaches 97.96% (Figure 3B)(Note 14). The device thus provides a high-speed response that can instantly respond to rapidly changing market conditions and detect opportunities for maximally profitable margin trading at extremely high probabilities.

Systems that instantly execute most-rational actions in response to a changing environment are expected to find application in a wide range of fields and to foster innovation. For example, they can be applied to financial fields such as high-speed trading of financial assets, dynamic risk assessment, and optimization of transaction costs. Industrial robots will be able to make real-time selections of the most efficient movements, according to surrounding conditions. Such systems will also realize high-speed power transactions that promote use of renewable energy sources whose power generation levels change from moment-by-moment, and dynamic control of power distribution networks to minimize damage from disasters.

Toshiba will advance research and development of financial solutions centered on solving combinatorial optimization problems at high speed with low latency, and in collaboration with Toshiba Digital Solutions Corporation will advance new business development in the fintech field. Toshiba is also recruiting expert human resources to promote R&D and new business development in the field of financial engineering. Toshiba will continue to research and develop innovative instantaneous optimal response systems in fields other than finance.

(postscript added on Oct. 8, 2020)
Toshiba presented the technology at the IEEE International Symposium on Circuits and Systems (ISCAS)(Note 15)(Note 16). 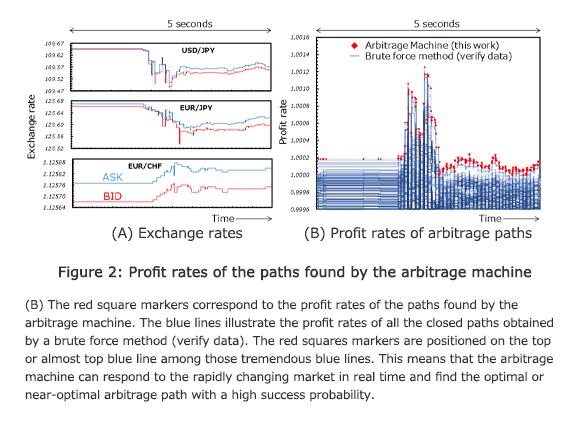 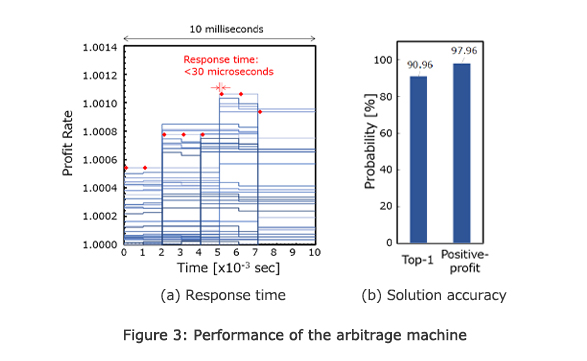