TOKYO―Toshiba Corporation (TOKYO: 6502) has developed a new magnetic material with characteristics that deliver major improvements in motor efficiency at minimum cost, and with the potential to win significant reductions in power consumption, necessary toward achieving a low-carbon future.

Motors account for approximately half of the world's electric power consumption. Any advance that can improve their efficiency promises major benefits to society as a whole, and will help to promote the shift to a carbon-free economy. Toshiba’s new material greatly boosts motor energy conversion efficiency when it is used as the wedges in the motor, particularly in the medium to large induction motor(Note 1). The material can be installed at minimal cost with no need for design changes.

Through testing in an induction motor in the railway rolling stock drive systems, Toshiba confirmed an efficiency increase of 0.9 pt(Note 2), with an improvement approaching the efficiency of permanent magnet synchronous motors(Note 3). The material also offers excellent heat resistance, suiting it for applications such as railway rolling stock, automobiles, robots, and industrial and medical equipment. If used in all motors operating worldwide today, with the same level of improvement in efficiency recorded by Toshiba, the material would allow the elimination of ten 1 GW power plants(Note 4).

Wedges in motor prevent motor coils from falling out of their slots. They are normally made of non-magnetic material, but the use of magnetic material has been found to guide magnetic flux toward the wedges, improving energy conversion efficiency. However, the conventional magnetic material used as the wedges is composed of spherical magnetic metal particles with insufficient control of the magnetic flux, causing leaks to the unwanted directions (Figure 1). The magnetic wedge material itself also has high magnetic loss. It also has low heat resistance, making it unsuitable for railway rolling stock and other applications that require high heat resistance.

Toshiba also found that compacting flaky magnetic particles with a heat-resistant binder heightens thermal stability, with barely any weight decrease, even when held in a hot, 220°C environment for a long period of time (Figure 3). This high heat resistance opens the way to widespread the range of application of the magnetic wedge. 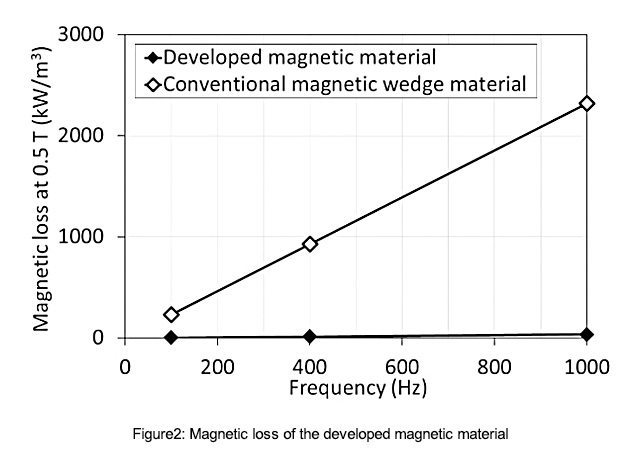 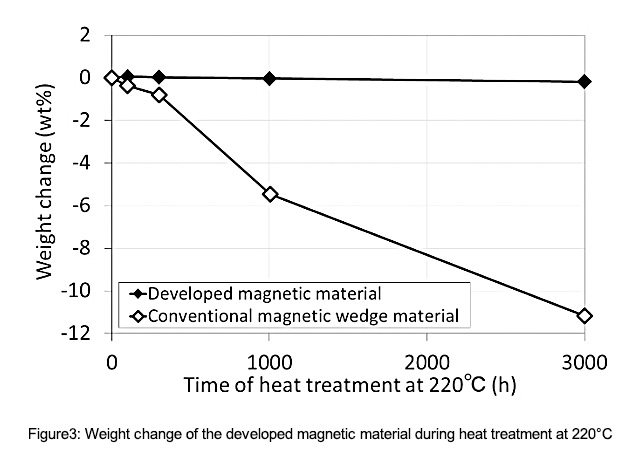 (Note 1)
In induction motors, the rotating magnetic field of the stator induces a current in the rotor, and the rotor is rotated due to the electromagnetic force by the induced current. This system configuration is simple and inexpensive, and also offers excellent maintainability. In contrast, a permanent magnet synchronous motor is rotated by the attractive magnetic force between the rotating magnetic field of the stator and the permanent magnet of the rotor. It is generally more expensive than an induction motor but has better controllability and efficiency.
(Note 2)
"pt" is the measure for comparing motor efficiency. It indicates the difference in motor efficiency values.
(Note 3)
The material can also be installed in permanent magnet synchronous motors to realize much higher efficiency.
(Note 4)
Calculated assuming that motors account for approximately 45% of the 22 trillion kWh of annual electric power consumption worldwide and that average efficiency is increased by 0.9 pt across all motors.
(Note 5)
Related technologies were reported in J. Magn. Magn. Mater. 473 (2019) 416 and J. Magn. Magn. Mater. 519 (2021) 167475.