Toshiba’s New Analysis Technology for a Hard Disk Write Head is World’s First to Image Dynamics of a Write Head with Precision of One Ten-billionth of a Second, Will Contribute to Increased Hard Disk Capacities

Tokyo, Sendai, Sayo—Using synchrotron radiation(Note 1) at SPring-8(Note 2), large-scale synchrotron radiation facility, Toshiba Corporation (TOKYO: 6502), the Japan Synchrotron Radiation Research Institute (JASRI), and Tohoku University have succeeded in imaging the magnetization dynamics of a hard disk drive (HDD) write head(Note 3) for the first time ever, with a precision of one ten-billionth of a second. The method makes possible highly precise analysis of write head operations, and will accelerate the development of the next-generation write head and further increase in HDD capacity.

Details of the research(Note 4)were published in the Journal of Applied Physics on October 6 and will be presented in the 44th Annual Conference on Magnetics in Japan, on December 14.

International Data Corporation predicts a five-fold increase in the volume of data generated worldwide in the seven years between 2018 and 2025, an immense increase. HDDs continue to serve as the primary data storage devices in use, and in 2020 the annual total capacity of shipped HDDs is expected to exceed one zettabyte (1021 bytes), with sales reaching $20 billion(Note 5). Securing further increases in HDD capacity and higher data transfer rates with logical write head designs requires a highly detailed and accurate understanding of write head operations. There are, however, high barriers to achieving this: current write head have a very fine structure, with dimensions of less than 100 nanometers(Note 6), and magnetization reversal occurs in less than a nanosecond, rendering experimental observations of write head dynamics very difficult. Instead, the write head analysis has been conducted by simulations of magnetization dynamics, or done indirectly by evaluating the write performance on the magnetic recording media. Both approaches have their drawbacks, and there is clear demand for a new method capable of precisely capturing the dynamics of a write head.

Toshiba, JASRI and Tohoku University have used the scanning soft X-ray magnetic circular dichroism microscope(Note 7) installed on the BL25SU beamline at SPring-8, a large-scale synchrotron radiation facility, to develop a new analysis technology for the HDD write head. This realizes time-resolved measurements through synchronized timing control, in which a write head is operated at an interval of one-tenth of the cycle of the periodic X-ray pulses generated from the SPring-8 storage ring. Simultaneously, focused X-rays scan the medium-facing surface of a write head, and magnetic circular dichroism imaged temporal changes in the magnetization. This achieves temporal resolution of 50 picoseconds(Note 8) and spatial resolution of 100 nanometers(Note 9), enabling analyses of the fine structures and fast write head operation. This method has the potential to achieve even higher resolutions i.e. by improving the focusing optics for the X-rays.

The development team used the new method to obtain the time evolution of the magnetization images during reversal of the write head. The imaging revealed that magnetization reversal of the main pole IS completed within a nanosecond and that spatial patterns from magnetization appear in the shield area in response to the main pole reversal. No previous research into write head operations write has achieved such high spatial and temporal resolutions, and use of this approach is expected to support high-precision analyses of write head operations, contributing to the development of the next-generation write head and to the further improvements in HDD performance. 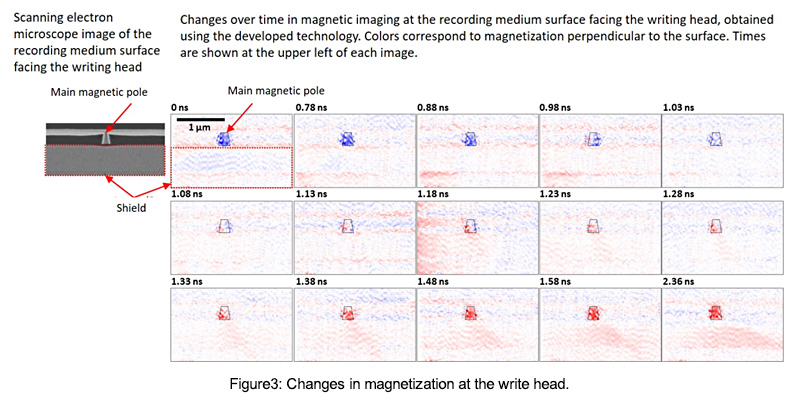 (Note 1)
Synchrotron radiation facility SPring-8:
A RIKEN facility at the Harima Science Garden City in Hyogo prefecture that produces the world's highest performance synchrotron radiation. JASRI provides support for its use. “SPring-8” is an abbreviation for “Super Photon ring-8 GeV.” SPring-8 applies synchrotron radiation in a wide range of research fields, including nanotechnology, biotechnology, and industrial applications.
(Note 2)
Synchrotron radiation:
A narrow, powerful electromagnetic beam generated by accelerating electrons to near the speed of light and bending their paths with magnets. Synchrotron radiation beams are extremely bright, tightly focused and resistant to spreading, include a wide range of wavelengths from X-rays to infrared, are polarized, and are emitted as repeated short pulses.
(Note 3)
Write head:
In an HDD, a write head generates a localized magnetic field (a write field) that performs digital recording on a magnetic recording medium. The recording density and data transfer rate of an HDD depends on the write field distribution and operation speed.
(Note 4)
The results of this research:
Published on 6 October in the online edition of the Journal of Applied Physics, an academic journal published by the American Institute of Physics: doi.org/10.1063/5.0022571
(Note 5)
Source: IDEMA Japan January 2020 Seminar Report.
(Note 6)
Nano: 1/1,000,000,000 (one-billionth).
(Note 7)
Scanning soft X-ray magnetic circular dichroism microscope
“X-ray magnetic circular dichroism” is a phenomenon in which the absorption coefficient of circularly polarized X-rays in a magnetic material differs between left and right circular polarization. A scanning soft X-ray magnetic circular dichroism microscope uses focused soft X-rays from a light source. By scanning X-rays in two dimensions and by measuring differences in absorption between left and right circular polarization, nanoscale magnetization is examined with extremely high sensitivity. This apparatus was developed as part of the Ministry of Education, Culture, Sports, Science and Technology’s “Element Strategy Initiative: To Form Core Research Centers” project.
(Note 8)
Temporal resolution of 50 picoseconds:
Meaning changes over time were captured at intervals of 1/20,000,000,000th (one twenty-billionth) of a second.
(Note 9)
Spatial resolution of 100 nanometers
Meaning different points separated by only 100 nanometers could be distinguished.