TOKYO--Toshiba Corporation (TOKYO: 6502) has developed a prototype aqueous rechargeable lithium-ion battery that points the way to realization of the world's first aqueous large-capacity stationary storage battery that can operate at -30°C.

Countering climate change and reducing greenhouse gas emissions will require greater reliance on renewable energy sources that are characterized by intermittent availability, and maximized utilization will only be possible with management systems integrating storage batteries that are safe and reliable over the long-term. Toshiba has addressed this concern by developing a battery cell that uses water as the aqueous electrolyte. The battery demonstrates low risk over the long term, even in the event of exposure to fire, which expands the range of locations where it can be installed. It also delivers the high durability of over 2,000 charge and discharge cycles, a performance that can contribute to expanded use of renewable energy.

Details of the technology will be presented online at the 61st Battery Symposium in Japan on November 19, 2020.

The sun and wind are increasingly important renewable power generation sources worldwide, crucial for advancing de-carbonization. However, unlike fossil fuel power sources, output from renewables fluctuates with the time of day, weather, season and location, and achieving a stable supply requires the deployment of large-scale stationary batteries to regulate output. The batteries used in these systems are lithium-ion rechargeable batteries (LIB), as they exhibit high energy density. However, a major issue with LIB is safety. LIB achieves their high energy density by using a flammable organic solvent with a wide stable voltage window as the electrolyte. This flammability often restricts where storage batteries ca be installed. Guaranteeing high-level safety is a major concern because large-scale stationary storage batteries must be operated for a long period of time.

Toshiba’s SCiB™ achieves excellent safety performance by replacing the usual graphite anode with a nonflammable lithium titanate oxide (LTO). Moving beyond this, the company has further boosted safety by developing a battery that uses an aqueous electrolyte. While the LTO secures the battery against shock and vibration, the aqueous electrolyte ensures safety in the event of a fire at the installation location. This advance both simplifies the safety measures necessary during installation, and broadens the scope of locations where systems can be installed. It is now possible to consider installation near residential areas and inside office buildings, a factor that will contribute to more widespread use of large-scale storage batteries.

The problem with aqueous batteries until now has been that, with time, electrolysis of aqueous electrolyte degrades battery and cycle performance. Toshiba has overcome this with a new battery structure that combines a solid electrolyte separator and an electrolyte with a high concentration of lithium salt. This approach prevents hydrogen ions (water molecules) migrating from the cathode to the anode, suppressing the electrolysis (Figure.1). It has enhanced performance by increasing the number of charge and discharge cycles to over 2,000 (Figure. 2), 10 times higher than is possible with current technology, while also achieving a voltage of 2.4V, high for an aqueous battery.

Toshiba’s development is also highly promising for other reasons. The new battery adopts an aqueous electrolyte that does not freeze at low temperatures, which realizes charge and discharge at a temperature as low as -30° C. Another plus is that the aqueous electrolyte not only improves operational safety, but is also expected to reduce costs by simplifying manufacturing facilities.

Toshiba will further advance research and development of the aqueous battery, aiming to provide samples at an early date. 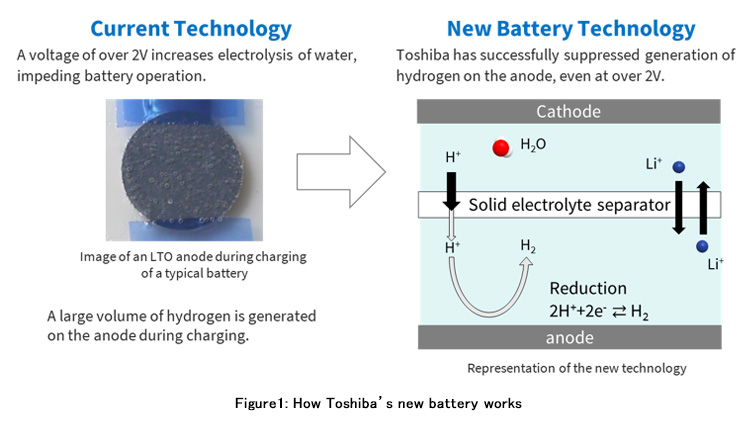