Toshiba’s compact superconducting multiband receiver integrates a newly developed multiband filter with a superconducting circuit(Note 1) that realizes zero resistance. This in turn secures high-sensitivity astronomical observations in the 1.4GHz to 2.4GHz frequency band, something that has become increasingly difficult due to interference from mobile wireless base stations operating on the similar frequency.

The second advance is a new cryocooler that is only 1/10 the size of current radio telescope cryocoolers and that consumes only 1/30 of the power(Note 2). Maintaining superconductivity in the superconducting circuit has until now required a large cryocooler to keep the temperature below -196°C. Toshiba has successfully used its know-how in high thermal insulation and low loss wiring technologies to shrink the cryocooler and reduce its power consumption, allowing not only for installation in space-restricted places but also securing significant energy savings for large-scale radio telescope projects.

The capabilities of the new receiver, which is manufactured by Toshiba Hokuto Electronics Corporation, have been tested by the National Astronomical Observatory of Japan and the National Astronomical Research Institute of Thailand, using very long baseline radio interferometry (combining data from a single source gathered by multiple receivers in different locations) to observe the interference fringes of targets. The trial confirmed the receiver’s capabilities(Note 3). Radio telescopes capture radio waves from celestial bodies. They reach out much further than optical telescopes to make more extensive, long-distance radio astronomical observations that are used to study natural phenomena in space. While the signals they capture across the radio wave spectrum are weak, they can be revealing—last year, the Event Horizon Telescope, an international collaboration, captured the first ever image of a black hole, attracting worldwide attention.

Currently, numerous large-scale radio telescope projects around the world aim to observe black hole jets(Note 4), narrow but powerful beams of radiation and particles thrown out along the axis of rotation of the black hole at close to the speed of light. However, the frequency for observing this still mysterious phenomenon is close to that of wireless systems for smartphones, and interference from their signals has become a significant problem. 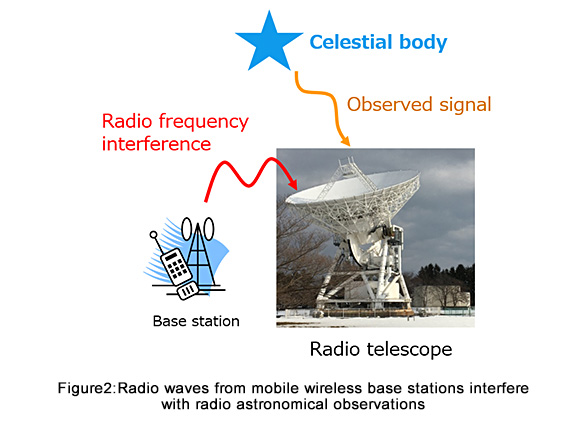 The superconducting multiband filter integrated into Toshiba’s new receiver resolves cross-frequency interference. The filter can receive four frequency bands simultaneously, but even so signal loss is very low, at 0.1dB or less, while its high performance attenuates any radio frequency interference to 1/10,000 or lower. Use of the filter makes it possible to construct a radio telescope observation system in the 1.4GHz to 2.4GHz frequency band that is not troubled by external interference.

The filter makes it possible to observe frequency bands that produce a specific spectrum, such as the neutral hydrogen emission line in the 1.4 GHz band and the hydroxyl group (OH) maser emission line in the 1.6 GHz band, which will contribute to understanding the distribution and flow of plasma gas in black hole jets. Maintaining a circuit in a superconducting state requires cooling it to -196°C, which in turn demands a powerful cryocooler. However, the trade-off here is between cooling capacity and size: the more powerful the cryocooler, the larger it is, and the larger too the overall receiver. Toshiba overcame this with new wiring technology for cryogenic equipment that has a unique thermal insulation structure that delivers both high thermal insulation characteristics and low signal loss. It has 10 to 50 times the thermal insulation performance of copper coaxial cables, and prevents heat from the wiring section from entering the circuit. 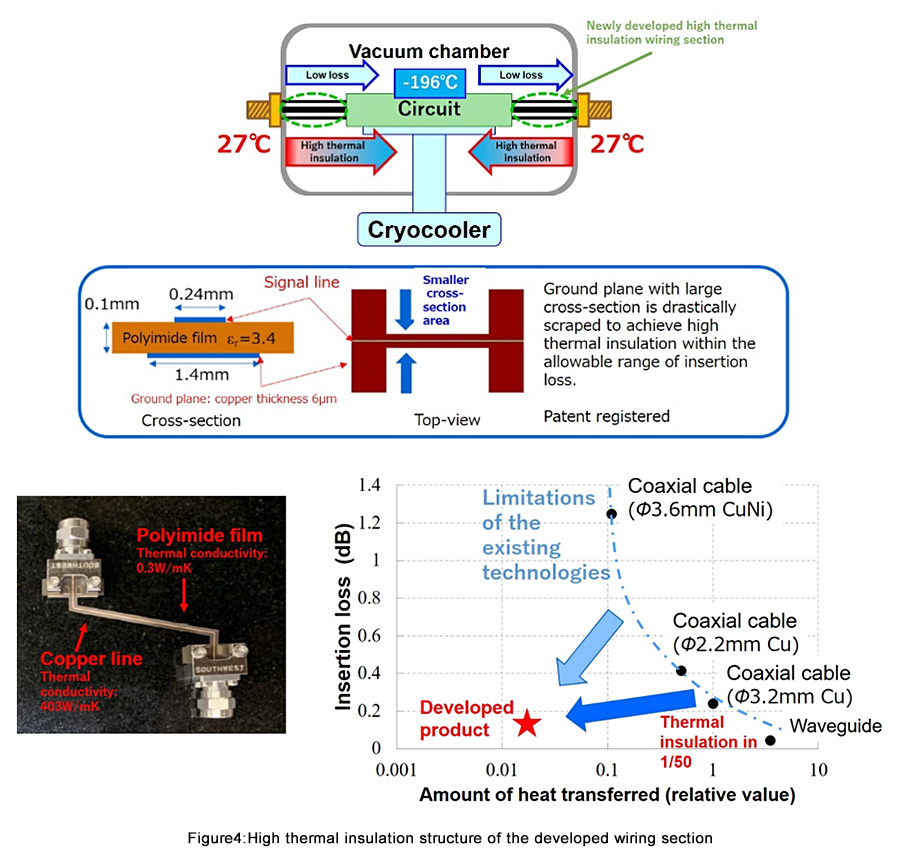 Going forward, Toshiba will continue to demonstrate the receiver in radio telescopes in Japan, targeting early commercialization. Alongside this, the company will proceed with further R&D, toward deployment the receiver in South Africa as part of the SKA project(Note 5).

(Note 1)
In a superconductor resistance in direct current falls to zero at very low (cryogenic) temperatures. In this case, the circuit is formed with high-temperature superconductor (YBCO) with a transition temperature Tc=90K (-183℃).
(Note 2)
Radio telescopes typically use a GM cryocooler in the cooling receiver. A separate helium compressor is required and with the vacuum vessel housing the circuits the combined weight is over 100kg. Power consumption is several kilowatts.
(Note 3)
Correlated data from multiple radio telescopes are called fringe (interference stripe) to indicate that the processed data is stronger and the peak is shown. The ability to detect fringes provides evidence of successful observations and correlations.
(Note 4)
While the immensely strong gravity of many black holes absorb surrounding material, some eject material in narrow beams of plasma at as fast as 99.99% of the speed of light. How these jets are driven and the reason why they shine are among the biggest mysteries of black holes.
(Note 5)
An international project of 10 countries participate that will install radio interferometer systems using multiple antennas with a total aperture area of 1 square kilometer in the deserts of South Africa and Australia. More than 2,000 radio telescopes will be installed in South Africa.