NEDO and Toshiba Corporation (TOKYO: 6502) have established the Autonomous Mobile Robot Interface (AMR-IF), a software solution that connects autonomous mobile robots in an operations and control system (Figure. 1). The AMR-IF specification allows multiple mobile robots of various types, from different manufacturers, to be operated in a common system, and is expected to promote cost reductions and the use of robots in new areas. Sample software for an operations terminal implementing AMR-IF was released today as open source software, allowing companies to test the specification for themselves.

The development is part of NEDO’s Technology Development Project for Robot Commercialization Applications. Going forward, Toshiba and NEDO will promote the AMR-IF as an international standard interface for mobile robots.

Autonomous mobile robots are increasingly deployed in manufacturing and logistics, as well as in public facilities, where the services they perform include delivery, security and cleaning. However, there are still obstacles holding back their use. One of the biggest is getting different kinds of robots from different manufacturers to work together. We are still at the point where individual manufacturers develop their own top-level operations control systems for their robots, with a custom interface to connect them. Robots from different manufacturers cannot be connected with the same operations control system, and introducing a new mobile robot to work alongside robots from another manufacturer requires redesign of the system.

To solve this problem, the New Energy and Industrial Technology Development Organization (NEDO) and Toshiba Corporation have developed AMR-IF as an interface that defines interconnection procedures for mobile robots and their operation control systems—a solution that provides robots from different manufactures a shared system. System integrators of host systems and the manufacturers of mobile robots can simplify the system development process by using AMR-IF, which is expected to drive cost-effective production of robots and their adoption in more and new areas. The development was undertaken as part of NEDO’s Technology Development Project for Robot Commercialization Applications(Note 1).

Sample software for an operations terminal implementing AMR-IF was released as open source software, and it can be downloaded from the following sources:
Github: https://github.com/AMR-IF/AMR-IF-UI (English)

The research results publication website of the Technology Development Project for Robot Commercialization Applications:
https://robo-marc.github.io/ (NEDO ROBO-MARC) (in Japanese only)

2. Results of the research

AMR-IF defines protocols necessary for the operational control of mobile robots, including map information, movement path instructions, and robot localization. Applying the AMR-IF specifications realizes efficient formulation of routing plans for multiple mobile robots, and constructs an operations control system that avoids the deadlock that occurred due to simultaneous selection of the same path by multiple robots.

By utilizing this software, system integrators and robot manufacturers can easily develop AMR-IF-compliant operations control systems. During the development process, Toshiba will incorporate user feedback to enhance and improve the software’s interface. 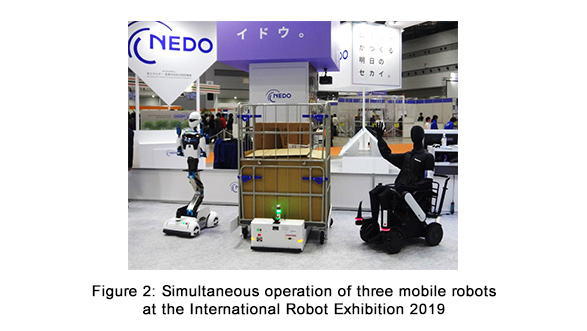 The Robot Revolution Initiative (RRI) council, established under Japan’s Robot Strategy introduced by the Headquarters for Japan’s Economic Revitalization on 10 February 2015, discusses software architectures for mobile robots, and reviews guidelines on specifications. Toshiba will continue to work to establish AMR-IF as a de facto international standard through the RRI and promotional activities.

For this press release: