TOKYO─Toshiba Corporation (TOKYO: 6502) has developed ultra-high-speed wireless technologies for handling backhaul in fifth-generation (5G) mobile communications systems─the relay links and networks that connect terminal access links to the carrier's core network.(Note 1) In demonstration tests emulating communications distances of 5km,(Note 2) the technologies achieved transmission speeds of 20 Gbps, a performance that eliminates the need to install the optical fiber or other cables that have been required for backhaul lines until now. This advance has the potential to lower 5G network construction and maintenance costs (Figure 1).

Toshiba presented the technologies on December 10th at the IEEE Globecom 2019 conference on communications technologies in Hawaii. 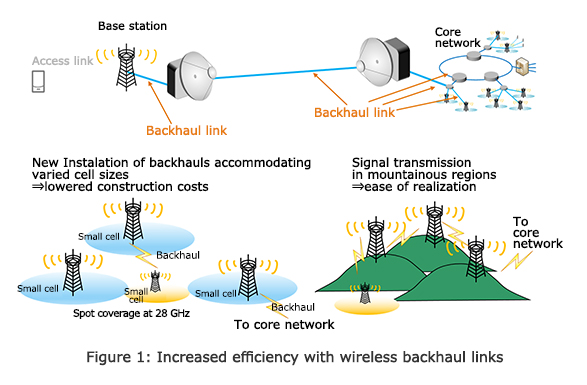 Manufacturers are constructing in-house 5G networks that allow smart factories to connect arrays of sensors and optimize their production process, and as communications infrastructure for in-house mobility networks.

Increasing transmission speeds between 5G base stations and mobile terminals will require capacity increases in the backhaul links that connect base stations to the core network.
5G networks cannot achieve their promised performance without uniform coverage, so new base stations must be installed even in places where it is difficult to lay optical fibers, such as mountains. Wireless backhaul is already used to connect base stations to the core network without relying optical fibers; but high frequencies (70/80 GHz) over wide bandwidths are necessary to increase the capacity of wireless backhaul links, and delivering stable communications remains an unresolved issue. Furthermore, due to the non-uniform frequency characteristics of analog circuits in transceivers, it is difficult to maintain high-quality signals over wide bands.

In wireless backhaul networks, transmitting and receiving antennas are installed in locations where there are no buildings or other obstacles. Conventional MIMO, a signal multiplexing technique, secures an independent path for each signal by using waves reflected from obstacles situated among the antennas. Where reflected waves cannot be utilized, independent propagation paths cannot be secured for each signal, which degrades performance. The polarized MIMO allows independent paths to be secured without mutual interference, due to differences in polarization, securing stable doubling of transmission speeds.

OFDM transmissions, in which data are loaded on multiple orthogonal frequencies, are advantageous in that they are highly compatible with MIMO transmission and resistant to degradation in the frequency domain (Figure 2). Moreover, when received signals are degraded by the non-uniform frequency characteristics of analog circuits, Toshiba-developed distortion correction technologies successfully extract high quality receiver-side information (Figure 3).

Toshiba will continue to develop long-distance and large-capacity transmission technologies that contribute to the advance of 5G and other communications technologies. 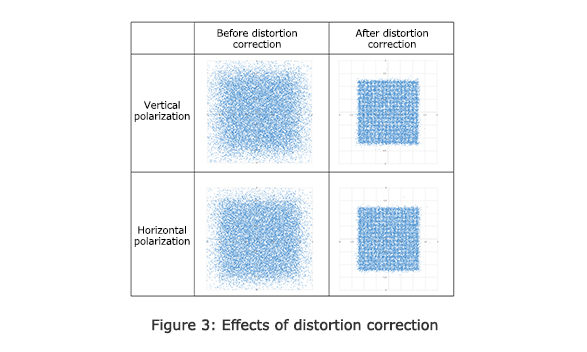 (Note 1)
A network that connects base stations with other mobile communication networks.
(Note 2)
The transmission and reception antennas are 900-m apart, with an attenuator installed on the receiving side to simulate a 5-km distance.