TOKYO─Toshiba Corporation (TOKYO: 6502) has developed a simple, highly accurate cancer detection technology that utilizes microRNA(Note 1) in blood. With a unique electrochemical microRNA detection technology, the company confirmed to comprehensively distinguish between healthy individuals and patients with 13 cancer types, such as pancreatic cancer and breast cancer, within two hours and with 99% accuracy at the research and development level. The company will begin verification tests in 2020 to implement this technology in our society as soon as possible.

The details of the technology will be presented at the 42nd Annual Meeting of the Molecular Biology Society of Japan, held from December 3−6, 2019, in Fukuoka, Japan.

Cancer has been the leading cause of death in Japan since 1981(Note 2), and claimed approximately 370,000 victims in 2018. Today, the probability of a Japanese developing cancer at some point in their lifetime stands at 62% for men and 47% for women(Note 3). However, advances in treatment have won dramatic improvements in survival rates, as long as the cancer is detected at early stage. For example, in lung cancer, the 5-year survival rate is approximately 60% for stage II cancers, but as high 97% for stage 0(Note 4). Early detection is crucial.

MicroRNA, small non coding RNA molecules, has attracted attention as a reliable marker for cancer. Humans have roughly 2,500 types microRNA in their blood, and their activity provides the basis for analysis. Toshiba developed its microRNA-based cancer detection technology through participation in the Japan Agency for Medical Research and Development's Project Focused on Developing Key Technology for Discovering and Manufacturing Drugs for Next-Generation Treatment and Diagnosis, a development program focused on developing the foundations of microRNA measurement technology in bodily fluids(Note 5).

In a three-way collaboration, advanced medical knowledge on microRNA from Tokyo Medical University and the National Cancer Center Japan were brought together for testing with Toshiba's microRNA detection technology. The results fully distinguished between samples from healthy individuals and those indicating the presence of any of 13 cancers with 99% accuracy. The results include some samples of stage 0, the very earliest stage of cancer growth, before its spread.

The results of this research are immensely promising, and pave the way to development of a simple, highly accurate screening tool for the 13 cancers. The time required for testing can be reduced to less than two hours by combining a microRNA chip with a compact, dedicated testing devices, securing same-day results.

The Toshiba Next Plan, released in November 2018, announced Toshiba Group's full-fledged re-entry into medical businesses, primarily into precision medicine characterized by very early detection of conditions and provision of individualized treatment. The newly developed microRNA detection technology achieves early detection of cancer with high-level accuracy, and will enable early treatment that helps to improve survival rates and quality of life. 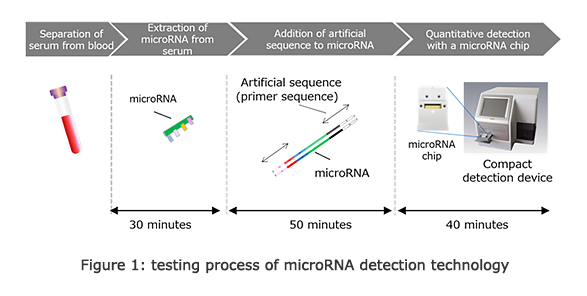 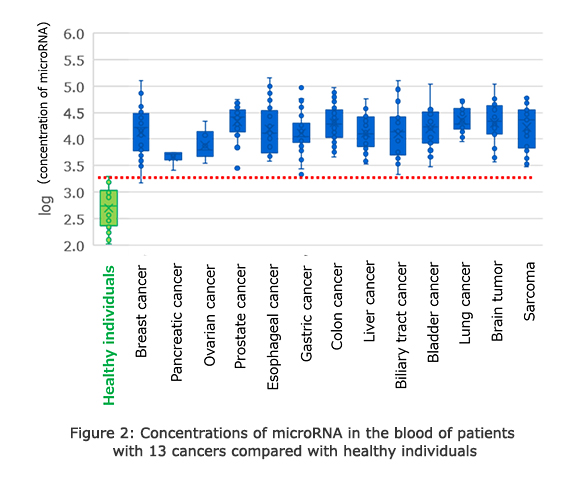 (Note 1)
microRNA
microRNA molecules, short nucleic acid molecules (consisting of about 20 bases) that regulate genes and proteins in the body, are known to be stable in blood. Examination of the types and quantity of microRNA in blood has recently been found to potentially enable early detection of various cancers such as lung cancer and breast cancer. This discovery has created anticipation for microRNA as a novel diagnostic marker.
(Note 2)
Cancer is the leading cause of death among Japanese people
The leading causes of death in 2018 were as follows. #1: Cancer (malignancies; tumors), 373,547 deaths (mortality rate per 100,000 population: 300.7); #2: Heart disease (not including hypertensive heart disease), 208,210 deaths (167.6 per 100,000 population); #3: Old age, 109,606 deaths (88.2); #4: Cerebrovascular disease, 108,165 deaths (87.1).
Cancer (malignancies' tumors) is responsible for an increasing number of deaths every year, and has been the leading cause of death every year since 1981.
https://www.mhlw.go.jp/toukei/saikin/hw/jinkou/geppo/nengai18/dl/gaikyou30.pdf (Ministry of Health, Labor and Welfare)
(Note 3)
Cumulative morbidity risk based on 2014 nationwide estimations (Cancer Information Service, National Cancer Center) https://ganjoho.jp/reg_stat/statistics/stat/summary.html
(Note 4)
Haigantouroku Goudou Iinkai 5-year postoperative survival rates in lung cancer based on 2010 nationwide lung cancer registry data
Journal of Thoracic Oncology 14, 212-222 (2019)
(Note 5)
Medical Research and Development's Project Focused on Developing Key Technology for Discovering and Manufacturing Drugs for Next-Generation Treatment and Diagnosis
A project conducted from 2014 to 2018, lead by the National Cancer Center. This project comprehensively analyzed the relations between serum microRNA and 13 different cancers with the goal of early cancer detection.
https://www.ncc.go.jp/jp/information/pr_release/2014/0613/index.html (Cancer Information Service, National Cancer Center)