TOKYO─Toshiba Corporation (TOKYO: 6502) has developed a radio wave imaging technology that uses millimeter-wave radar(Note 1) to capture high-definition visualizations of objects concealed within clothing. It can detect dangerous objects, such as weapons and explosives, as people walk through checkpoints in stations, airports, shopping centers and other public spaces, with no need for stop and search, and can be applied to new security support services that do not interrupt traffic flows. Toshiba will present details of the technology at 11:00 AM (6:00 PM, JST) on September 6 at the IRMMW-THz conference in Paris.

Terrorism throws a long shadow. Though incidents have declined from 14,415 in 2007, the worst year on record, Country Reports on Terrorism, issued by the US Department of State, reported 8,584 terrorist attacks in 2017(Note 2). One reason for the falloff is the increased deployment of technologies to help secure public safety, including surveillance cameras. However, although they can monitor individuals, cameras cannot detect concealed weapons or bombs, which is why security checkpoints are a familiar sight at venues as different as airports and music festivals. While effective, these checkpoints are also famous for being slow, and for the delays they cause, as people are checked in turn, and often individually searched by inspectors. They are also expensive to operate, as they require costly equipment and multiple personnel. There is a clear need for high-performance, low-cost inspection systems that can quickly and effectively monitor large flows of people, enhance security and maximize convenience─and also detect potentially dangerous people, like terrorists.

In developing a high-definition imaging technology for security application, Toshiba has focused on millimeter-wave radars. Highly regarded for their excellent cost-performance, and widely used to in automotive applications to advance autonomous driving and collision prevention, millimeter-wave radar signals can penetrate clothing, but they reflect off the metal of guns and knives and the materials used in explosives. Antennas arranged in a plane can capture the reflected signals from the radar and generate an image.

However, producing high-definition images of a target object that are free of extraneous virtual images requires the irradiated millimeter wave to have half-wavelength intervals of approximately 2mm. This is problematic, as it requires a large array of antennas and produces an enormous amount of data. Toshiba has discovered that virtual images can be canceled by combining two imaging results measured at intervals exceeding relatively prime half wavelengths. This has allowed development of a method for generating high-definition imaging images with approximately 1/7 (approx. 15%) the number of measurements required when measuring at half-wavelength intervals. With this reduced number of measurements fewer antennas and sensors and less memory are required, simplifying system construction and installation. Demonstration experiments of the technology have confirmed that it produces high-definition images of a model gun concealed in clothing.

In 2020, Toshiba will cooperate with railway companies and amusement parks, to advance research and development of this technology through further demonstration experiments. By promoting the introduction of security systems for public spaces, Toshiba will contribute to the realization of a safe, secure society. 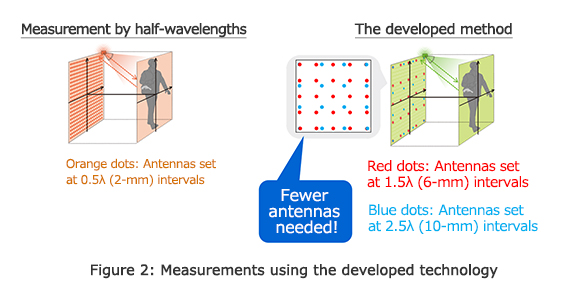 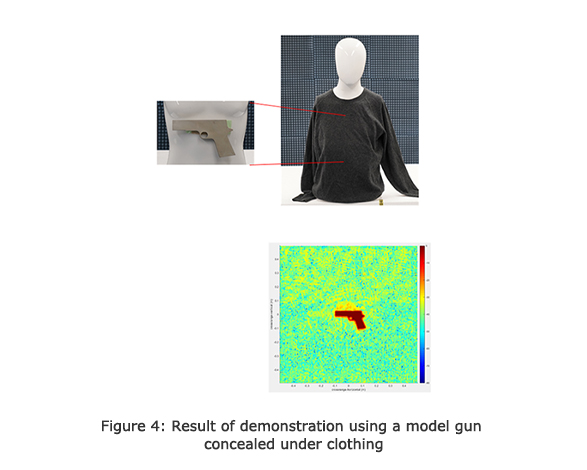 (Note 1)
Millimeter-wave radar
Millimeter band radar refers to audio waves with a frequency of 30 to 300 GHz and wavelengths of 1 mm to 1 cm. This is the frequency band closest to that of visible light, and it has similar properties: extreme linearity and excellent environmental resistance to rain, fog, and snow. Its transmission range is inferior to that of longer waves, but it supports high capacity for information transmission. Millimeter-wave radar is an application of millimeter waves for sensors, allowing measurements of distance, speed, and angle to a distant object.
(Note 2)
Terrorism statistics source
US Department of State, Country Reports on Terrorism