Tandem solar cells improve overall power conversion efficiency by layering different types of solar cells as top and bottom cells, and using both to generate power. Toshiba is a leader in their development, and has recorded significant advances with cells using copper, one of the world's most abundant elements. In January 2019, the company announced the world's first low-cost transparent cell fabricated with cuprous oxide, and simultaneously developed a tandem solar cell that used the transparent cuprous oxide cell as the top cell. This realized a power conversion efficiency of 22%, equivalent to that of a monocrystalline silicon cell. In its latest advance, Toshiba has developed a tandem cell that surpasses the efficiency of the monocrystalline silicon, and raised the power conversion efficiency rate by 1.8%, to 23.8%.
Toshiba will present the details of this technology at IEEE PVSC 46 in Chicago, from June 16 to 21, 2019.

The Japanese government's Fifth Strategic Energy Plan, adopted in July 2018, targets establishing solar power generation as a primary power source by 2030. Achieving this and the required power output will require increased use of tandem solar cells, so as to make effective use of limited installation areas.

After developing a transparent cuprous oxide, Toshiba channeled efforts into developing an efficient cell to realize the primary feature of tandem-type cells: a power conversion efficiency of the tandem-type cell surpassing that of the bottom cell alone. When developed in January 2019, the tandem-cell efficiency was 4.4% for the top cell and 17.6% for the bottom cell, a combined efficiency of 22%, equivalent to that of a monocrystalline silicon cell.

From bottom to top, the transparent cuprous oxide solar cell is composed of a rear transparent electrode, a p-layer, an n-layer, and a front transparent electrode (Figure. 1). The thin cuprous oxide film forming the p-layer absorbs short-wavelength light, and the generated positive current is extracted from the rear electrode; negative current is extracted from the front electrode via the n-layer. The combination of p and n layers creates an energy difference between the two layers at the p-n junction. As the potential difference increases, the voltage that can be extracted as electricity decreases commensurately, and the efficiency decreases (Figure. 2).

Toshiba accordingly focused on the material used in the n-layer and employed a newly developed n-type oxide semiconductor in place of conventional materials to reduce the potential difference (Figure. 3). This technology realized a tandem solar cell that achieves a power conversion efficiency 23.8%. This is 1.8% higher than the 22% efficiency of a monocrystalline silicon bottom cell, and confirms improved efficiency from the use of a tandem cell.

Toshiba will further optimize the n-layer to reduce energy loss, thereby further improving efficiency. Once tandem solar cells with efficiencies exceeding 30% are realized, they are expected to find use in new green energy applications, such as on-site power generation and battery storage systems, distributed regional power supplies, and energy aggregation to adjust the balance of power supply and demand. More advanced future applications are expected to include cars, buses, trains, and drones operating on solar energy.

Toshiba aims to complete technology development for transparent cuprous oxide solar cells and their application in tandem solar cells by 2022. The company will continue to pursue research and development aimed at realizing efficiencies of over 30%, significantly surpassing the performance of today's monocrystalline silicon solar cells. 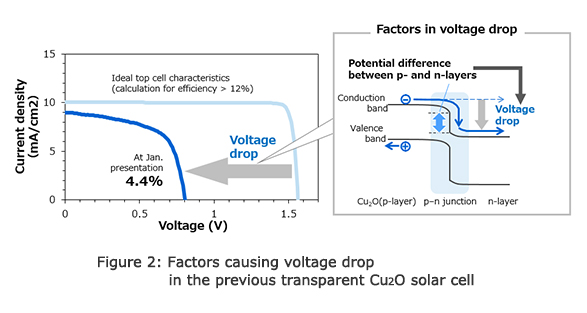