TOKYO─Toshiba Corporation (TOKYO: 6502), a recognized innovator in products and technologies that contribute to a better future, has achieved a major breakthrough in photovoltaic power with the fabrication of the world's first transparent cuprous oxide (Cu2O) solar cells for use in tandem solar cells. By stacking solar cells with different properties, tandem cells widen the wavelengths at which sunlight can be absorbed, and are expected to increase power generating efficiency while lowering costs.

Cuprous oxide occurs naturally and abundantly, an advantage that will contribute to cost reductions. The transparent solar cells that Toshiba has developed with the material generate electricity by absorbing light at short wavelengths, while allowing transmission of approximately 80% of light with longer wavelength. Used as the top cell layered above a crystalline silicon solar cell, they make it possible to convert light into energy over a wide range of wavelengths, from short to long. In combination with today's widely used crystalline silicon solar cells they have the potential to realize low cost, high efficiency tandem solar cells.

Details of the technology will be reported in Toshiba Review Vol. 74 No. 1, scheduled for publication on January 23, 2019.

The Japanese government's Fifth Strategic Energy Plan, adopted in July 2018, targets solar power generation as one of primary power sources for 2030. Meeting that requirement and energy needs, and making effective use of limited installation space will stimulate demand for tandem solar cells that are more efficient than today' mainstream silicon solar cells.

Tandem solar cells have a transparent top cell layer that directly captures light, plus a bottom layer cell that also receives light through the top cell. This combination is expected to deliver higher power generation efficiency than arrays made up only of crystalline silicon cells. In fact, this has already been demonstrated in commercialized tandem solar cells that incorporate gallium-arsenide semiconductors. However, while these cells are reported to have a power generation efficiency in the high 30% range, 1.5 to 2 times higher than crystalline silicon solar cells, their manufacturing costs are astronomical─several hundred to several thousand times higher than for crystalline silcon solar cells.

Toshiba has focused its attention of developing the world's first transparent cuprous oxide solar cells. Cu2O is an oxide if copper, a highly abundant element, which promises low costs, and also delivers very efficient power generation characteristics. Another advantage is that it has a very limited impact on power generation by crystalline silicon cells, because the two materials generate electricity by absorbing light at different wavelengths.

Although cupric oxide (CuO) and copper (Cu) impurities can easily form in cuprous oxide, Toshiba realized a transparent cuprous oxide cell with a unique thin film growth method. This controls the presence of oxygen during film formation, and suppresses formation of CuO and Cu in the film. Film prepared with Toshiba's method can transmit approximately 80% of light with a long wavelength of 600nm or higher. The company's experiments with a prototype tandem solar cell fabricated with the new technology found that a crystalline silicon solar cell deployed as a bottom cell can maintain a high power generation rate, at about 80% of the efficiency realized when used alone. 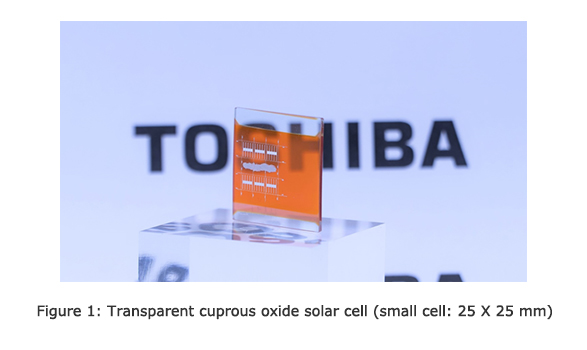 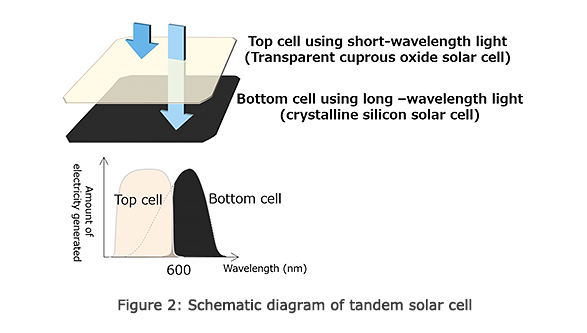