New Energy and Industrial Technology Development Organization (NEDO) and Toshiba Corporation (TOKYO: 6502) have developed the world's largest film-based perovskite photovoltaic module. The module is 703cm2 and realizes a power conversion efficiency (PCE) of 11.7%, overcoming the difficulties of increasing size and efficiency at the same time. The module was realized with meniscus printing technology owned by Toshiba and a newly developed printing process. Alongside its size and efficiency, the flexibility and lightness of the module is expected to open up possibilities for use in a wide range of locations.
NEDO and Toshiba will continue work to enlarge the module and to boost its efficiency to that of crystal silicon photovoltaic modules by improving the printing technology and materials used in the perovskite layer. A part of the encapsulation technology used in the module was developed in cooperation with Sekisui Chemical Co., Ltd. The ultimate goal is to achieve photovoltaic modules with a levelized cost of electricity of 7 yen per kWh by 2030. 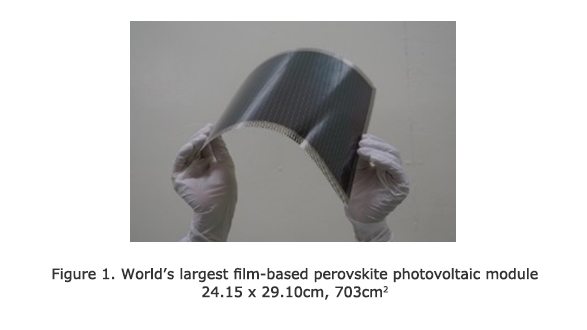 Toshiba developed the printing process for a larger module by controlling the chemical reaction between PbI2 and MAI on the substrate, using the ink composition as a mechanism. The company has also improved the uniformity of the layer thickness and increased the homogeneity of the crystal layer properties over a larger area, by controlling the process and adjusting the perovskite crystal growth conditions during the printing process. As a result, a PCE of 11.7% has been obtained on a module with an area of 703cm2, almost as large as 900cm2, the practical a scale. It is a step closer to practical application. 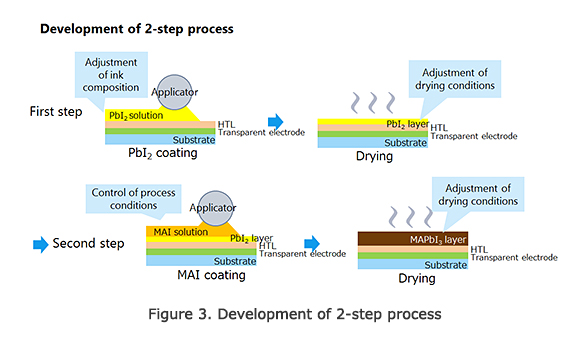 (Note 1)
Photovoltaic modules where the active layer is made up of perovskite crystals
(Note 2)
The highest PCE of small sized perovskite photovoltaic modules. Source: Korea Research Institute of Chemical Technology (KRICT).
(Note 3)
PCE measured by the National Institute of Advanced Industrial Science and Technology, an internationally certified measurement institution. The maximum power point tracking (MPPT) method, the best measurement of PCE during actual usage, was used for the measurement. (The PCE by I-V measurement method was 11.5% for the forward sweep and 11.4% for the reverse sweep.)
(Note 4)
Development of high performance and reliable PV modules to reduce levelized cost of energy / Research and development of innovative new structure solar cells / Development of perovskite-type innovative solar cells with low production cost (Development of super lightweight PV module technology)
(Note 5)
Printing technology that uses the interfacial tension of the liquid material.