Toshiba has made a significant advance toward the realization of light, flexible solar modules that can be used in diverse locations by fabricating a perovskite solar cell mini module(Note 2) with the highest energy conversion rate yet achieved.

Perovskite solar cells have a light harvesting layer formed with crystals of a compoun with a perovskite structure. Such compounds are easily and cheaply manufactured, and offer good development potential in terms of energy efficiency. The main concerns are to increase cell size and to boost the energy conservation rate. Toshiba has achieved both by developing a 5-square centimeter cell that delivers an energy conversion efficiency of 10.5%(Note 1), the highest yet realized in a multi-cell mini module.

These results were obtained as part "Development of high performance and reliable PV modules to reduce levelized cost of energy" from the New Energy and Industrial Technology Development Organization (NEDO). They will be presented at the NEDO results report meeting, to be held at the Pacifico Yokohama Annex Hall in Yokohama, Japan, on 22 September. 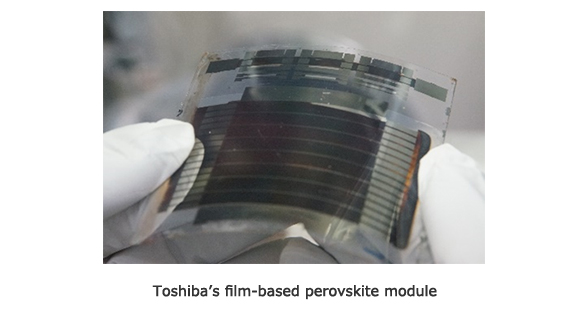 Crystalline silicon solar cells are the most widely used solar cells, but their arrays are heavy and inflexible, which restricts where and how they can be installed. Arrays of flexible, lightweight modules would increase the range of options, including extending installation to buildings with low load endurance, and installation on walls to help to realize net zero energy buildings and houses (ZEB(Note 5) and ZEH). Equally important, perovskite solar cells offer the promise of high conversion efficiency(Note 6)allied with reduced module costs, as they can be fabricated by printing.

To date, there have been two main roadblocks to developing film-based perovskite solar cell modules: the difficulty of forming large, uniform perovskite polycrystalline layers; and the inability of the scribe process to remove the layer formed on top of the electrode─the flexibility of the film substrate prevents application of the strong blade pressure required for removal─which increases the resistance between cells and decreases conversion efficiency. As a result, modules formed on a film substrate have been difficult to fabricate and have had low conversion efficiency; there have been few reports on the technology(Note 7).

Features of the Technology

Toshiba successfully applied a novel printing technology to fabrication of film-based perovskite solar cell modules, and achieved a 10.5% conversion efficiency in a 5X5cm module, the highest ever recorded.

Since this technology forms the substrate with a resin film, such as polyethylene terephthalate, a planar inverted structure (Figure 1) that can be fabricated at a temperature under 150℃ is used for the cell structure. Toshiba addressed the problem of increasing the area by applying meniscus printing technology developed through R&D of organic thin film solar cells, and succeeded in forming a uniform thin layer of methylammonium lead iodide(Note 8). This increased the efficiency of modules by reducing variation in properties between cells.

Toshiba's researchers also succeeded in increasing energy conversion efficiency by reducing the resistance between cells to the same level as with a glass substrate, through a combination of optimizing blade pressure during the scribe process, and also using materials that allow the layer covering the electrode to be removed even when blade pressure is weak. The reduced sheet resistance of the indium tin oxide transparent electrode developed for the resin substrate also contributed to increased efficiency. 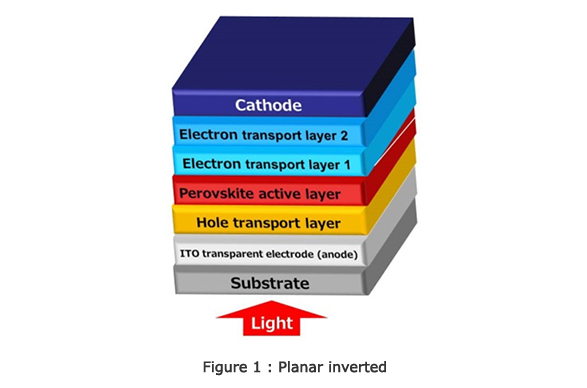 Looking to the future, film-based solar cells are expected to promote the use of solar cells in a diverse range of installation, and the use of high-efficiency perovskite solar cells in combination with low-cost fabrication technology may lead to reduced electricity generation costs. Toshiba will continue to promote research and development efforts that aim to realize efficiency that surpasses that of crystalline silicon solar cells and an electricity generation cost of 7 yen/kWh, the same price as in baseload power generation.

(Note 1)
The degree of efficiency in converting sunlight energy (photons) to electrical energy; as measured by the Japan Electrical Safety & Environment Technology Laboratories
(Note 2)
Cells are the basic element of solar cells; modules are multiple cells connected electrically. In the above photograph of the module, the long thin rectangular parts are cells.
(Note 3)
The process of removing part of the layers formed over the electrode to allow realization of a structure with cells connected in series.
(Note 4)
Toshiba is the world leader in terms of efficiency of organic thin film solar cells for cells, mini-modules, and modules (Solar Cell Efficiency Tables Vol. 50 (2017)).
(Note 5)
ZEB: Net zero energy building; ZEH: Net zero energy house.
(Note 6)
Worldwide, the highest reported conversion efficiency is 22.1%, but this is with a small cell of area 0.0946 cm2. Increasing the area and creating modules are problems.
(Note 7)
For example, University of Rome reported a conversion efficiency of 3.1% for an area of 31.36 cm2.
(Note 8)
CH3NH3PbI3 (MAPbI); a perovskite polycrystalline compound