Toshiba Corporation today announced that is has developed a method to reduce electromagnetic interference (EMI) in wireless rapid charging systems for electric buses. Radiated electromagnetic (EM) waves disturbs other wireless communications and their suppression is an important requirement for the realization of wireless rapid charging systems. Details of the new technology will be presented on September 19 at the IEEE Energy Conversion Congress and Exposition in Milwaukee, Wisconsin.

Batteries in electric buses must be frequently recharged, and wireless charging systems provide a safe and simple means for doing so. They use 85 kHz band, which is becoming the standard for wireless charging systems, and deliver power at 44 kW. However, utilizing frequencies of 10 kHz or above requires approval as an Industrial Facility Emitting Radio Waves under the Radio Act of Japan, and an application for permission requires that the magnitudes of radiated EM waves fall within levels that do not disturb other wireless communications. The magnitudes of radiated EM waves from 44 kW class wireless charging systems were ten times larger than the specified limits for EMI. 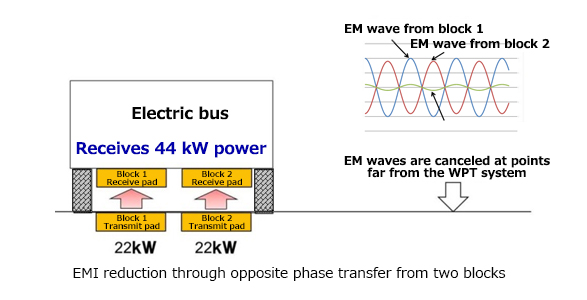 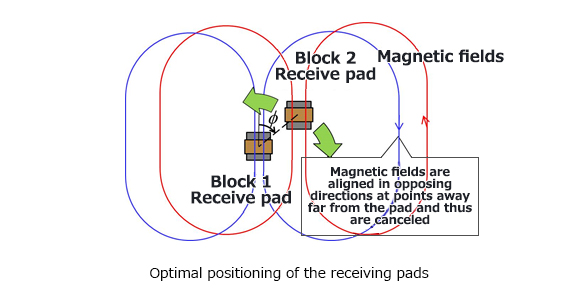 Using these technologies, the EM field strength 10m away from the device becomes approximately one-tenth the unreduced strength, allowing 44 kW power transfers within the limits of the Radio Act.

The new technology was employed in a field demonstration of electric buses from February 2016, in cooperation with the laboratory of Professor Yushi Kamiya at Waseda University's Faculty of Science and Engineering, as part of Low Carbon Technology Research and Development Program of the Japanese Ministry of the Environment. Field demonstration will continue through to the end of 2016, and Toshiba will use the results to identify issues related to the technology and continue research for its rapid practical realization.