Toshiba Corporation today announced the development of a new technology that uses solar energy, the power of the sun, to generate carbon compounds from carbon dioxide and water, and to deliver a viable chemical feedstock or fuel with potential for use in industry. Toshiba introduced the technology at the 2014 International Conference on Artificial Photosynthesis (ICARP2014) on 26 November, at the Awaji Yumebutai International Conference Center in Japan.

Atmospheric concentrations of carbon dioxide, widely understood to be a major cause of global warming(Note 1), continue to increase. There are also concerns about the exhaustion of fossil fuels, which are spurring interest in adoption of renewable energy sources(Note 2). Artificial photosynthesis technologies that use solar energy to generate carbon compounds from carbon dioxide and water are seen as promising means to resolve both issues.

Toshiba has developed an artificial photosynthesis technology that converts energy into carbon compounds from carbon dioxide at an efficiency of 1.5%, the highest level yet recorded(Note 3). Sunlight converts the carbon dioxide and water into carbon monoxide, a source for production of methanol, which can be used as a substitute for gasoline and as a feedstock in the manufacture of diverse products, including adhesives, medicines and PET bottles.

Other artificial photosynthesis technologies use materials that absorb UV light from sunlight to reach the high reaction energy required to convert carbon dioxide into a fuel. However, their low level of light utilization efficiency drags down the energy conversion efficiency, and practical application requires increased efficiency.

Toshiba's technology uses a gold nanocatalyst via nanoscale structural control technology applied to a multijunction semiconductor that absorbs light in the visible range with high light utilization efficiency. The company’s research work centered on investigating manufacturing conditions for the nanometer-order gold nanocatalyst, in order to increase the number of active sites that convert carbon dioxide into carbon monoxide, and the development of an efficient electrolyte. 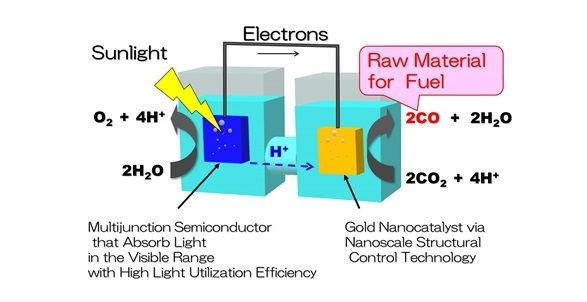 The long-term goal of the research work is to develop a technology compatible with carbon dioxide capture systems installed at facilities such as thermal power stations and factories, utilizing carbon dioxide to provide stockable and trailerable energy. Towards this, Toshiba will further improve the conversion efficiency by increasing catalytic activity, with the aim of securing practical implementation in the 2020s.

(Note 3) The efficiency at which the energy of sunlight is used to convert carbon dioxide and water into carbon compounds that are viable as a chemical feedstock or fuel.