Story of the development of High-efficient propulsion system

High-efficient propulsion system which is composed of three advanced technologies.
Has succeeded in reducing the electricity consumption by approximately 27% compared to the conventional vehicles*1

We have introduced the world's first*2 high-efficient propulsion system, which is composed of three advanced technologies, to Tokyo Metro's Marunouchi Line series 2000 trainset 2101. These technologies are 1: "VVVF inverter with All-SiC device" that converts DC voltage from a third rail for motor propulsion 2: Motor using permanent magnet "Permanent Magnet Synchronous Motor (PMSM)" 3:"SCiB™ rechargeable lithium-ion battery", an emergency battery which could be used to store surplus electricity and also for emergency driving.
It was used for series 2000 vehicle which had started commercial operation in February 2019. It has succeeded in reducing the electricity consumption by approximately 27% compared to the existing series 02 PMSM vehicle. It has won the Energy Conservation Grand Prize & Minister of the Environment Award in 2019*3.

*1 According to the result of comparison by measuring the electricity consumption on operating vehicle from February to May 2019 and upon mass correction. 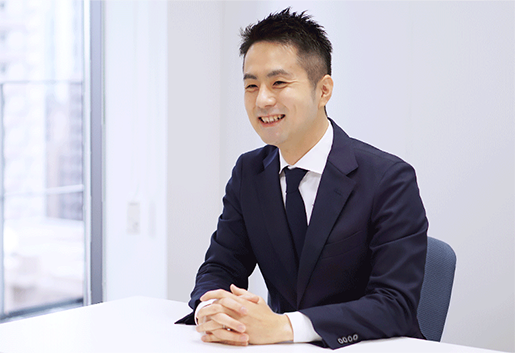 Tokyo Metro operates approximately 2,750 trains in seconds and transports an average of 4.98 million passengers (year 2020) per day. Among them, Marunouchi Line is a line with high congestion rate, short distances between stations, and many steep slopes and sharp curves. In addition, the length of the vehicle is 18m, which is a small to medium size class.
Therefore, we have conducted field tests in collaboration with Tokyo Metro, and discovered two potential issues. One is "effective use of surplus regenerative electricity" and the other is "effective use of vehicle underfloor space". In order to contribute to the important infrastructures in the Tokyo metropolitan area, the development of energy-saving equipment with reduced heat emission, size/weight, and safety/stability was required. 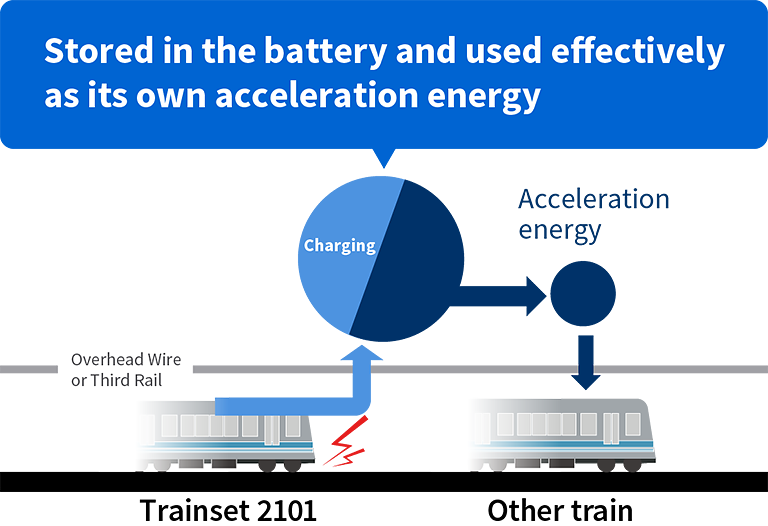 We have been working on the "effective use of surplus regenerative electricity" since 2015. Based on the operational status of the latest vehicles at that time, we analyzed the electricity that was released during the regenerative braking. We have developed a system that can store this surplus regenerative electricity with a battery mounted on the vehicle and to reuse it.
As to the "effective use of vehicle underfloor space," we developed 1.7kV rated All-SiC device with the support from NEDO*4 and applied it to inverters. As a result, we have succeeded in improving the efficiency of the circuits and in reducing the device size by 38% (compared to the conventional vehicle). In addition, with the adoption of the ALL-SiC device, the design of PMSM was also optimized at a higher level and together with the adoption of the frameless structure, it has achieved higher current, higher efficiency, and weight reduction. 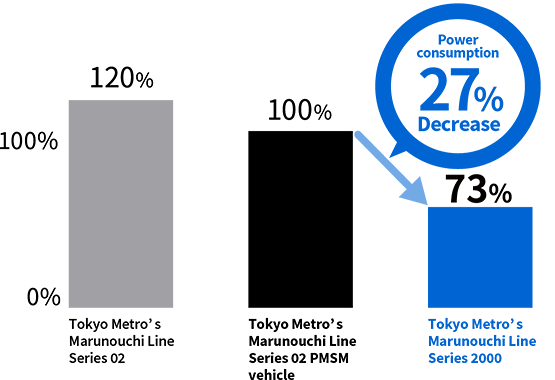 This system not only reduced the electricity consumption by 27% compared to the existing series 02 PMSM vehicle, but has made contributions to maintainability and safety measures. For example, by using the battery system for emergency driving, transportation to the nearest station is possible even in the accidental event of a power outage. This is a safety measure continuing from the Ginza Line series 1000 and one of the important factors supporting the safe and stable underground driving for the Marunouchi Line series 2000.
In addition, the vehicle was exhibited at InnoTrans, the world's largest railway trade fair held in Germany in 2018, and has drawn attention both in Japan and in the world.
We will continue to evaluate the regenerative absorption function and power assist function to further improve the energy-saving performance. 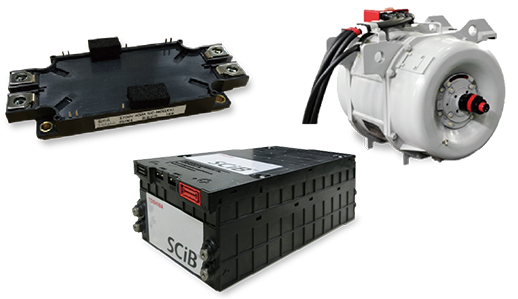 Toshiba Infrastructure Systems introduced a system which was composed of VVVF inverter using newly developed All-SiC devices, fully enclosed permanent magnet synchronous motor, and SCiB™ rechargeable lithium-ion battery to Tokyo Metro's Marunouchi Line series 2000, which started commercial operation in February 2019. We have succeeded in reducing the electricity consumption by approximately 27% compared to the conventional series 02 PMSM vehicle. Introduction of the system was the first case in the world.
In addition, the year after its introduction, this business model was evaluated and we received the 2019 Energy Conservation Grand Prize and the Minister of the Environment Award jointly with Tokyo Metro. 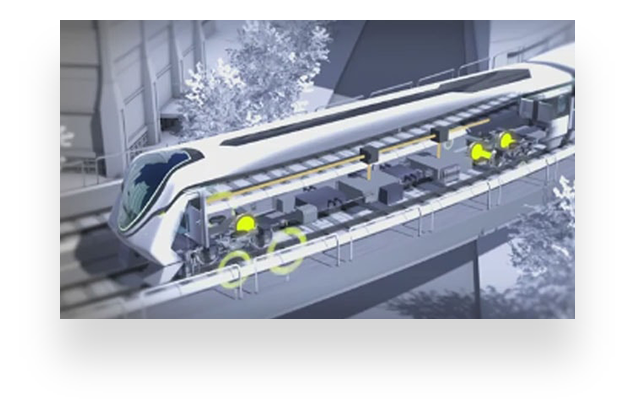 We have developed a system not only to meet the required speed and reliability, but also to meet the environmental consciousness. We provide various equipment targeting advanced environmental performance both in Japan and in overseas. 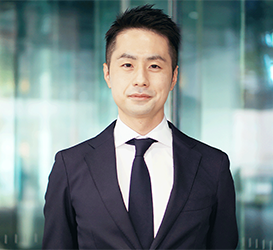 Nowadays, not only the railway industry but also various industries are entering a period of transition. However, what we could do has never changed. That is, to contribute to the safety, stability, and energy saving of Tokyo Metro with the latest technology, to discover and solve potential issues by repeating trial and error at site and using the actual equipment, and to demonstrate the world's first performance from Japan.
The Japanese railway industry has the world-class technology, quality, and human power. Toshiba's railway business has continued and developed for 120 years. We will continue to work closely with our customers to contribute to the world's first business originating in Japan.