Toshiba Corporation (TOKYO: 6502) has added 10Ah cell SCiB™ lithium-ion rechargeable battery to its product line-up. The new cell meets customer demand for more power with a capacity over three times that of the current 2.9Ah cell. It is suited for applications requiring rapid energy input and output, such as idling-stop systems for passenger vehicles, regenerative power systems for railways, and industrial equipment.

The lithium titanium oxide in the cell's negative electrode excels in safety, rapid charging performance and longer life characteristics, as lithium metal dendrite is hardly formed in low temperature charging that cause other batteries to short circuit or deteriorate in performance. 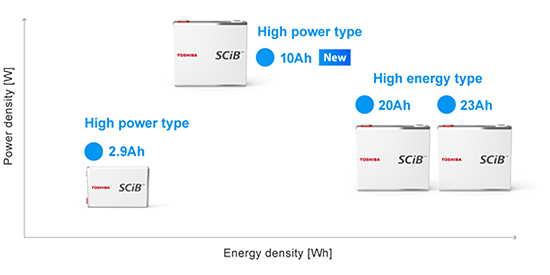 The new 10Ah SCiB™ cell has been adopted as the battery for mild hybrid system of Suzuki Motor Corporation's new WagonR and WagonR Stingray launched on 1st February*1, and exclusively distributed in the Japanese domestic market. It was chosen for its long life, safe performance and quality, plus its high energy input-output performance. The battery delivers power to on-board electrical component and provides motor assist during acceleration. It has helped to make WagonR the most fuel-efficient miniwagon*2 in Japan at 33.4km/L*3.

Toshiba will continue the proactive development of products that realize efficient use of energy and provide them to various applications around the world.