--Contribute to the Preservation of the Global Environment, including the Marine Environment--

TOKYO—Toshiba Corporation (TOKYO: 6502) today announced that its SCiB™ lithium-ion battery modules and related components for building a battery system are the first to win approval for use in marine vessels from Nippon Kaiji Kyokai (hereinafter “ClassNK”), the international ship classification society that promotes protection of life and property at sea, and protection of the marine environment.

Ships with the battery system can use renewable energy sources to charge the SCiB™ while at sea, allowing the system to power on-board equipment while the ship is at anchor and to provide power when entering or leaving port. At a time when pollution regulations are increasingly focused on the emissions ships generate*1, the SCiB™ will contribute to the protection of the marine and global environments.

ClassNK is a global organization with over 120 survey offices worldwide, and offers a wide range of maritime services that ensure the security of human life and property and promote conservation of the marine environment. The certification is based on Class NK’s “Guidelines for Large-capacity Storage Batteries,” which requires use of a BMU in the system as a safety feature. Toshiba’s BMU has passed safety tests at the National LABoratory for advanced energy storage technologies (NLAB) of the National Institute of Technology and Evaluation, an independent administrative institution under the jurisdiction of the Ministry of Economy, Trade and Industry, which confirmed it to be compliant with JIS C8715-2, the safety standard for lithium-ion battery cells and battery systems for industrial applications.

The International Maritime Organization (IMO) estimates that ship exhaust gases contain greenhouse gases (GHG) consisting primarily of CO2, with significant levels of nitrogen oxides (NOx) and sulphur oxides (SOx), and that international shipping accounted for approximately 2.2% of the world's CO2 emissions in 2012. Ships are responsible for about 800 million metric tons of CO2 every year, roughly equivalent to the annual emission of Germany. In view of the growing global economy and increasing demands for international shipping, IMO aims as part of its GHG reduction strategy to reduce CO2 emission by at least 40% by 2030; cut GHG emissions by at least half by 2050, and to achieve zero emissions as soon as possible this century.

While increasing numbers of ships are phasing out heavy oil fuel in favor of liquefied natural gas (LNG) for its fewer CO2, NOx, and SOx emissions, storage battery technologies are attracting attention as a power supply for on-board equipment or as an auxiliary power source that will also help to reduce CO2 emissions.

Lead acid batteries have long dominated the use of on-board storage batteries on ships, but they are often criticized for their large size and heavy weight relative to available energy density. In contrast, lithium-ion batteries provide greater capacity and energy density despite their smaller size, but may pose a potentially greater safety threat. Preventing battery destruction or ignition due to thermal runway is of crucial importance in a ship’s confined space, with limited escape routes.

The lithium titanium oxide negative electrode of Toshiba’s SCiB™ is extremely low risk in respect of explosion or combustion even in case of an internal short-circuit caused by external shock. Fully functional at -30°C, and with a long life of over 20,000 charge cycles, the SCiB™ is suited to use in a wide range of automotive, industrial, and energy storage systems that require high levels of safety and reliability.

With ClassNK certification, Toshiba has strengthened its SCiB™ business in a new area, and will propose the SCiB™ battery module and components for a wide range of vessels, from small to large. Toshiba also continues to contribute to global environmental protection, including the marine environment. 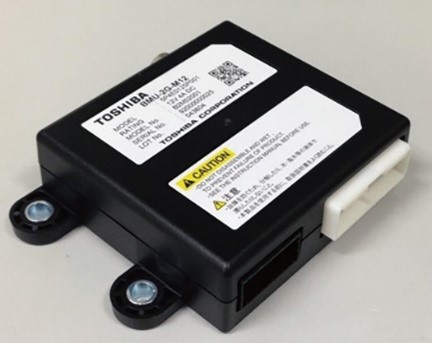 *1: To regulate the air pollution caused by marine vessels, the international convention MARPOL 73/78 was amended by the International Maritime Organization (IMO) in 1997, and global regulations on nitrogen oxides (NOx) and sulphur oxides (SOx) emissions from ship exhausts entered into force in May, 2005. Starting 2020, the limit for sulphur content of ships' fuel oil was lowered from 3.5 weight percent (wt%) to 0.5 wt%.

*2: Toshiba’s battery system using the SCiB™ lithium ion battery was certified as compliant with the highest safety integrity level (SIL4*3) of the EN (European Norm) 50126 standards (RAMS*4) and the RAMS safety requirements of EN 50129, which is mandated for rolling stock in Europe.

*3: SIL4: Safety integrity level with a probability of failure per hour (PFH) of less than 1×10-8

*4: RAMS: Specification and demonstration of reliability, availability, maintainability and safety