Heavy-ion radiotherapy irradiates cancerous tumors with heavy particle beams, such as carbon ions, and has proved to be a highly effective tool for treating radiation-resistant cancers.

The MEXT prize winners took on the task of designing and manufacturing the world’s first superconducting electromagnets for a rotating gantry, in order to realize a smaller, lighter heavy-ion irradiation system. This eliminates restrictions in directing the beam, and makes it possible to bring heavy-iron radiotherapy to general healthcare facilities. In addition, an increase in the speed of 3D scanning irradiation has improved the efficiency of cancer treatments with a rotating gantry system.*

Messrs. Iwata, Takei and Orikasa’s work and achievements are expected to promote the use of heavy-ion radiotherapy systems in general medical treatment facilities. The new gantry is patient-friendly in that it reduces stresses during treatment and also alleviates difficulties and side-effects resulting from treatment. Successful development of world’s first small rotating gantry is also expected to make Japan’s home-grown heavy-ion radiotherapy system more competitive in international markets. 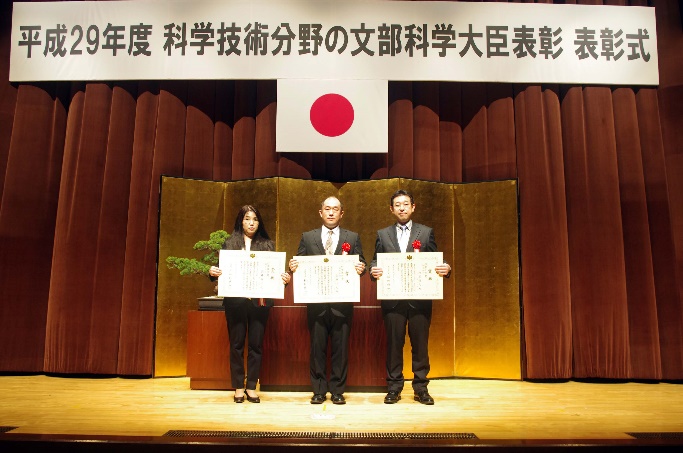 From left to right, Yuka Takei and Yoshiyuki Iwata of QST, and Tomofumi Orikasa of Toshiba.