TOKYO—Toshiba Corporation (Tokyo: 6502) today announced the results of field tests of electric buses charged with its wireless rapid rechargeable battery system. The tests, carried out with the cooperation of Waseda University, concluded that using the buses to replace standard diesel buses could cut CO2 emissions from daily operation by up to 60%1. The project was supported by the Ministry of the Environment's Low Carbon Technology Research and Development Program.

For the field test, Toshiba developed a 44kW wireless rapid rechargeable battery system that feeds power to the battery when the bus is parked over charger pads. The buses were customized to run on Toshiba's innovative SCiB™ rechargeable batteries, and provided regular service between All Nippon Airways Co. Ltd. facilities in  Kawasaki and vicinity of Haneda Airport in Tokyo for the year from February 2016 to January 2017. The CO2 emission reduction was calculated by the laboratory of Professor Yushi Kamiya of the Faculty of Science and Engineering at Waseda University.

Recharging was carried out with a magnetic resonance2 system operating in the 85kHz band, the proposed international standard. Magnetic resonance was selected as it is more forgiving than electromagnetic induction3, which requires close alignment and small separation of the charge transmitting and receiving pad. The charge pad in Toshiba’s system can be misaligned by as much 20cm along its width and 10cm along its length, and the two pads can be as far apart as 10cm.

The SCiB™ battery installed in the test electric buses is rugged, reliable and has a long life, showing almost no fall-off in performance even after 15,000 quick charge and discharge cycles. It is highly suited for use on shuttle buses operating at locations such as tourist sites and airports, which must combine heavy use with frequent and fast charging.

Toshiba also used the project to verify that a light-duty EV equipped with a wireless battery charge receiving pad could be efficiently charged by the same charging system as the bus.

Commenting on the project, Dr. Osamu Hori, Director of Toshiba Corporation Corporate Research & Development Center said,“ I’m convinced that wireless rapid charging system will help boost the use of electric buses. Toshiba will continue research and development of convenient charging technologies and advanced technologies, and contribute to both reducing environment loads and improvement of the quality of urban transportation.”

Overview of the field test 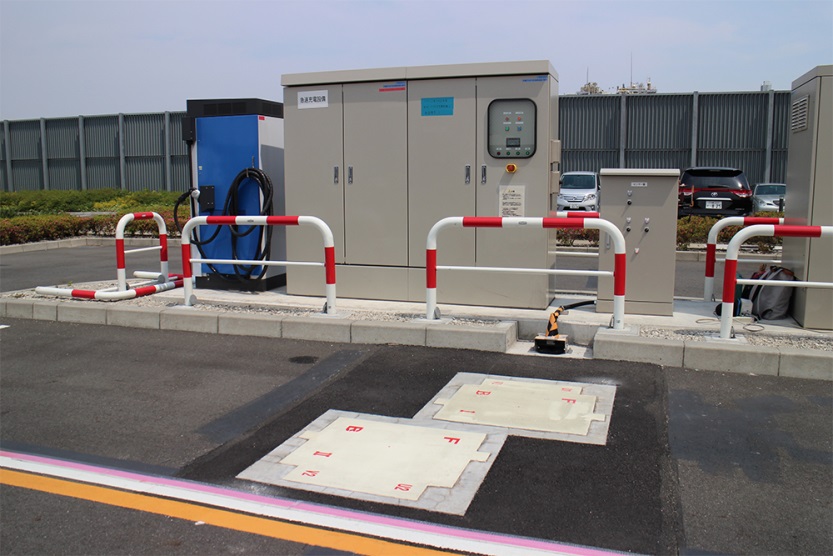