The consortium led by the two companies will construct a large-scale carbon capture facility that will capture carbon dioxide (CO2) emitted by a thermal power plant, and evaluate the technology’s performance, cost and environmental impacts. The project will run from 2016 to 2020, and the consortium will use the results to develop policies and measures to facilitate carbon capture and storage (CCS) deployment in Japan.

Toshiba will construct a carbon capture facility designed to capture more than 500 tons of CO2 a day, about 50% of its daily emissions, from the Mikawa Power Plant (capacity: 49,000 kW) operated by Toshiba subsidiary Sigma Power Ariake Co., Ltd., in Omuta, Fukuoka prefecture. Mizuho and the other 11 members will investigate an environmental impact assessment method for CCS, the framework necessary for the smooth introduction of CCS in Japan, and overall CCS system appropriate to Japan. The demonstration project aims to achieve practical applications of this technology by 2020.

The Mikawa Power Plant is now being retrofitted to accommodate both coal- and biomass-fired power generation. When the demonstration facility is completed in 2020, it will become the world’s first power plant*2 equipped with a large-scale carbon capture demonstration facility that is capable of capturing carbon dioxide from a biomass power plant.
Commenting on the project, Takao Konishi, Vice President of Toshiba’s Energy Systems & Solutions Company said, “Toshiba is committed to the realization of a low-carbon society. Alongside CO2-free power generation methods, such as nuclear, renewables and hydrogen-based power, Toshiba is working on technologies for reducing CO2 emissions from thermal power plants, including CCS and ultra- supercritical coal-fired thermal power generation. Through this project in Mikawa, we aim to further increase the efficiency and scale of CCS as a step toward global promotion of cleaner energy production.”

Yasushi Kaji, General Manager of MHIR said, “MHIR will work to improve the environment for deploying CCS as a measure against climate change as well as to formulate a national policy based on the findings of this project. MHIR will advance its efforts in the field of environment and energy in order to help realize a sustainable society by assisting with policy planning, corporate management, and R&D promotion.”

CCS is a CO2 reduction technology that can be applied to both new and existing thermal power plants. Along with other low-carbon technologies such as renewable energy, it is expected to help combat climate change. Toshiba and MHIR will seek to contribute to the mitigation of climate change through the early deployment of CCS in Japan and overseas. 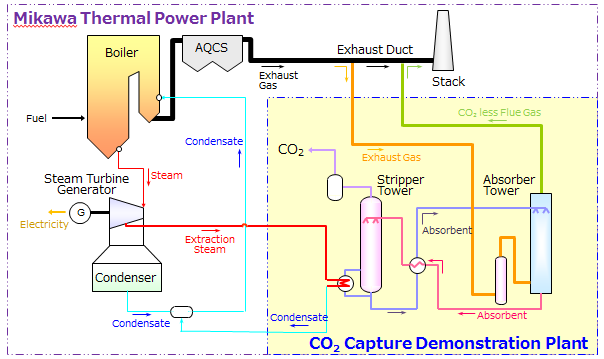