The size of the equipment had been an issue in heavy-ion radiotherapy, since the accelerator and the rotating gantry, the major components that transport and adjust the carbon ion beam to generate high magnetic fields with large normal-conducting magnets. Adoption of superconducting magnets has achieved a more compact, lighter rotating gantry than the typical 25-meter long heavy-ion radiotherapy gantry; the gantry of the NIRS’ system, with superconducting magnets attached to a cylindrical rotary body, 11m in diameter and 13m long (see Figure 1).

The new gantry can rotate the radiation port in a 360-degree circle and irradiate a patient from all directions, eliminating the need to tilt the treatment couch. The gantry can also deliver a concentrated dose of radiation by irradiating targeted tumors from multi-directions, since the beam’s positioning and angle can be precisely controlled to avoid critical organs such as the spinal cord and nerves. The new gantry is patient-friendly in that it is expected to reduce not only patient stress during treatment but also the possibility of difficulties and side-effects caused by the treatment.

NIRS presented the development of the rotating gantry, together with the results of clinical trials and basic researches, at “The 2nd International Symposium on Heavy-Ion Radiotherapy and Advanced Technology”, an NIRS-sponsored symposium held at Akiba Hall in Tokyo’s Chiyoda ward on Saturday January 9. The symposium was held to promote heavy-ion radiotherapy globally, and was attended by physicians and researchers engaged in heavy-ion radiotherapy in Japan and overseas.

Heavy-ion radiotherapy uses heavy-ions that treats cancers by accelerating charged nuclei that are heavier than other radiation beams, such as X-rays and proton beams. While X-ray and proton radiation therapies generally use a gantry to deliver radiation from all angles, through 360 degrees around the patient, the world’s only previous rotating gantry for heavy-ion radiotherapy was that installed at a German institution, which is extremely large at 25m long and a massive 600 tons. This led to the accepted wisdom that a rotating gantry with normal-conducting magnets would not find wide use.

About the rotating gantry for heavy-ion radiotherapy

A major feature of the newly developed rotating gantry is the use of compact cryogenics technology based on the refrigerator-directly-cooling method. This reduces the need for liquid helium to cool the superconducting coils below 4 Kelvin (K) and thereby maintain the superconducting state*3. Consequently, the rotating gantry is extremely safe and easy to handle in ordinary medical facilities.

When a patient lies down on the robotic treatment couch in the treatment room (Figure 2), the radiation port is rotated to irradiate the patient with heavy-ion beam*5 from the optimal angles for the shape and size of a tumor identified by a 3D scanning irradiation system. Both sides of the radiation port are equipped with X-ray detectors to provide X-ray fluoroscopic observation of the tumor area and its surroundings. This makes it possible to adopt a respiratory-gated scanning irradiation system*6 that controls the beam while tracking tumor movement during respiration in real time. X-ray-image-guided, respiratory-gated irradiation and 3D scanning radiation treatment are combined. 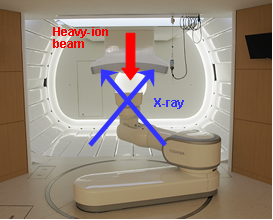 A heavy-ion beam can be used to irradiate from all angles. Consequently, the rotating gantry, operating with a 3D scanning irradiation system, makes it possible to deliver a more concentrated dose of radiation than ever before to a targeted tumor, while avoiding critical organs. The new gantry is expected to reduce treatment difficulties and side-effects and to increase its efficacy compared to conventional treatment.

In Figure 3, the white dot at the center of the each circle denotes a critical organ. The five peripheral circles show irradiation of the fan-shaped tumor surrounding the organ from five different angles, and the large central circle represents the total dose distribution, with the portion receiving a concentrated radiation dose highlighted in red. It demonstrates that the new gantry can focus an adequate dose of radiation on the tumor through multi-angle irradiation, while delivering a minimal dose to the critical organ.

Now that the new gantry is installed, NIRS is planning to conduct necessary testing and begin clinical treatment within fiscal year 2016. Yamagata University, which decided to introduce a heavy-ion radiotherapy system from Toshiba in September 2015, is also considering a rotating gantry as a major therapeutic device.

Drawing on development of the gantry, NIRS is now considering applying superconducting technology to the accelerator in order to further reduce the overall size and weight of a heavy-ion radiotherapy system. Toshiba will accelerate the research and development of leading-edge cancer therapy systems to realize high-quality cancer treatment and contribute to society.

Notes
1. Rotating gantry
In plain English, “gantry” means a high overhead structure supporting equipment. In the medical field, gantry refers to the cylindrical assembly of computerized tomography (CT), magnetic resonance imaging (MRI) and X-ray therapy systems. The patient receives treatment inside this ring. CT and X-ray therapy systems irradiate the patient by moving an X-ray generator through the gantry. Photon and heavy-ion radiotherapy systems have a radiation generator outside a treatment room, and the radiation port is rotated around the patient during treatment. In this case, the gantry is called a rotating gantry.

3. Superconducting state
The phenomenon of zero electrical resistance in superconductors when cooled below a certain temperature (the transition temperature or critical temperature)

4. 3D scanning irradiation
3D scanning irradiation uses a narrow heavy-ion beam with a diameter of approximately 1cm (a core radius of 2 to 3mm). The beam paints continuously over the target tumor in a raster-like pattern. It is adjusted horizontally using electromagnets, and its depth is controlled by adjusting its energy with the accelerator. As a result, the beam can effectively irradiate tumors even if they have a complex shape, without damaging normal tissues. The 3D scanning irradiation system developed by NIRS is capable of high-speed beam scanning, making it possible to work on organs that move as the patient breathes.
(Reference: Press release “NIRS starts treatment using world’s fastest respiratory-gated scanning irradiation (in Japanese),” issued on April 16, 2015)

5. Heavy-ion beam
Radiation generated by ionizing particles of helium or heavier nuclei and accelerating them with an accelerator. NIRS uses carbon ions as the source for its heavy-ion beam.