Toshiba Corporation today announced that it will take the lead in a demonstration project in Hokkaido that will establish the viability of a locally-based supply chain to support low-carbon, hydrogen power systems for small communities. The five-year project will run from 2015 to 2019, in cooperation with the Hokkaido prefectural government and Kushiro-shi and Shiranuka-cho, and will cover the generation, storage, transportation and use of hydrogen in power and heat generation.

Hydrogen, the lightest and most abundant element, has long been recognized as a potential power source. As technologies for its isolation and use make progress, Toshiba is taking the lead in developing integrated systems for using hydrogen as a fuel. The Hokkaido project is the outcome of a proposal submitted to Ministry of the Environment, Japan under the Ministry’s Low-Carbon Hydrogen Supply Chain Project, and is centered on “Expanding the use of hydrogen produced from a small hydropower plant and establishing a hydrogen utilization model suitable for the local characteristics of Hokkaido”.*1

Toshiba will construct a small hydropower plant in the Shoro Dam in Shiranuka-cho, Shiranuka-gun, on Hokkaido’s Pacific coast. Electricity from the dam will be used to electrolyze water and separate hydrogen. The hydrogen will be transported in tankers and pressurized tanks to various facilities, including dairy farms and indoor swimming pools, to fuel cells*2 and fuel-cell powered vehicles. Hokkaido is a cold region where sub-zero winter temperatures drive high energy consumption, and both the electricity and hot water produced by the fuel cells will be fully utilized.

Hokkaido enjoys abundant renewable energy resources, including hydro, wind, photovoltaic power generation, and Toshiba recognized it as a suitable location for establishing carbon-free hydrogen supply chains. Toshiba will collaborate with the Hokkaido government’s Hokkaido Council for the Promotion of Hydrogen Innovation to promote development of a hydrogen economy in Hokkaido.

Toshiba possesses the comprehensive suite of technologies essential for realizing a hydrogen economy. The company’s capabilities in renewables include photovoltaic, wind, hydropower and geothermal power generation, and it has leading-edge know-how in water electrolysis systems and fuel cells. Toshiba Group will combine its technologies to develop total hydrogen solutions, from generation through to utilization.

*1 The details of the project would be changed through discussion with Ministry of the Environment, Japan

*2  A fuel cell is a power generation system that uses the reverse chemical reaction of water electrolysis to combine hydrogen and oxygen in order to convert chemical energy directly into electricity. There is no loss of electricity in transmission, since electricity is produced where it is consumed.

Image of the Project 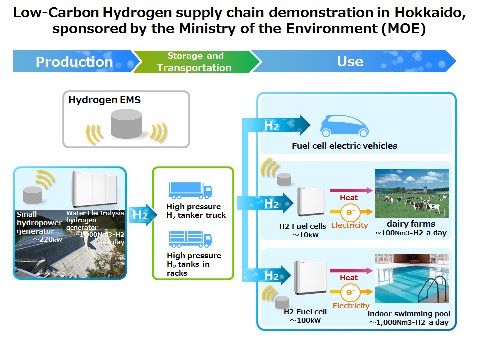