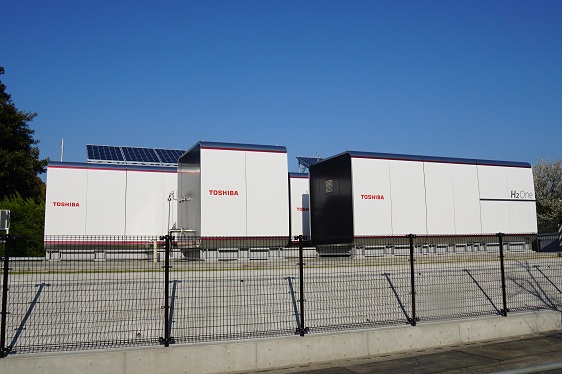 TOKYO— Toshiba Corporation (Tokyo: 6502) today announced the start of demonstration operation of H2One, an independent energy supply system based on renewable energy and use of hydrogen as a fuel for power generation. Kawasaki City and Toshiba have installed the system at the Kawasaki Marien public facility and Higashi-Ogishima-Naka Park in the Kawasaki Port area.

H2One combines photovoltaic installations, storage batteries, hydrogen-producing water electrolysis equipment, hydrogen and water tanks, and fuel cells. Electricity generated from the photovoltaic installations is used to electrolyze water and produce hydrogen, which is then stored in tanks and used in fuel cells that produce electricity and hot water.

Since H2One uses only sunlight and water for fuel, it can independently provide electricity and hot water in times of emergency, even when lifelines are cut. Kawasaki Marien and Higashi-Ogishima-Naka Park, a municipal facility to promote Kawasaki Port, is a designated emergency evacuation area. In times of disaster, H2One will use stored hydrogen to provide an estimated 300 evacuees to the site with electricity and hot water for about one week. The H2One system is housed in a container, and can be transported to disaster-hit areas on trailers.

In normal, non-emergency operation, H2One’s hydrogen energy management system is used to contribute to peak shift, which reduces demand for mains power at times of high demand, through optimized control of hydrogen production, power generation and storage. Toshiba is working to enhance its hydrogen storage capabilities to realize a self-contained solution of local energy production for local consumption.

The demonstration project will verify the effectiveness of a hydrogen-based emergency electric power and hot-water supply system and a hydrogen energy management system in normal operating circumstances at both of the Kawasaki sites It will also support improvement of overall system efficiency.

Toshiba is committed to creating a safe, secure and comfortable society, the “Human Smart Community,” that includes production of hydrogen from water by electrolysis powered by renewable energy sources. To achieve this commitment, Toshiba will combine wide-ranging technologies from across Toshiba Group.