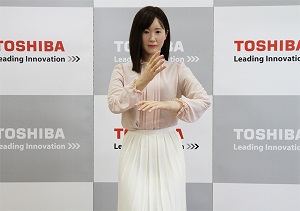 TOKYO—Toshiba Corporation (Tokyo: 6502) today announced that it has developed a lifelike communication android that can move its arms and hands smoothly and use Japanese sign language. The android is a prototype that the company will continue to develop towards achieving a service robot able to assist people in the fields of welfare and healthcare. The android will be showcased at CEATEC JAPAN 2014, which will be held from October 7 to 11.

The android has the appearance of a friendly young woman, an impression accentuated by blinking eyes and a warm smile. At present, the android can mimic only simple movements, such as exchanging greetings and signing in Japanese, but Toshiba will integrate its wide-ranging technologies in areas including sensing, speech synthesis, speech recognition and robotic control to realize a more sophisticated social robot by 2020. The goal is to design a companion for the elderly and people with dementia, to offer telecounseling in natural speech, communicate through sign language and allow healthcare workers or family members to keep an eye on elderly people.

Robots are expected to find widespread use in many fields, including welfare, healthcare, manufacturing, agriculture, services and entertainment. Toshiba is promoting “New Concept Innovation” in order to create new forms of value by combining its wide-ranging technologies. The company will develop robots by bringing together the advanced technologies from across Toshiba Group.