TOKYO-Toshiba Corporation (Tokyo: 6502) today announced that the company has concluded a memorandum of understanding (MOU) with Ethiopian Electric Power on a comprehensive partnership in geothermal power that will see the parties collaborate in power generation projects and personnel development.

Ethiopian Electric Power (EEP), a publicly owned utility, engages in the development of geothermal resources and the construction of power plants. Through the partnership with EEP, Toshiba will draw on its long-standing experience and expertise in geothermal systems to contribute to projects in Ethiopia. More specifically, the company will develop and manufacture major equipment, create operation and management guidelines, cooperate in personnel development, and start a waste heat utilization business.

Ethiopia is geothermal rich, with resources estimated at equivalent to 6,000 megawatts. However, this potential has yet to be explored and developed, and over 90 percent of the country’s electricity is from hydropower sources. Looking to the future, Ethiopia plans to increase its current installed generating capacity of 2,268 megawatts to 37,000 megawatts by 2037, and the development of geothermal power will play a significant role in reaching that target.

Toshiba commands the world’s largest market share for geothermal equipment with 24% of total installed capacity*. The company delivered Japan’s first geothermal turbine and generator, with a capacity of 20 megawatts, to the Matsukawa Geothermal Power Plant in Iwate in 1966. Since then, Toshiba has delivered 52 geothermal turbines and generators with a total installed capacity of approx. 2,800 megawatts to North America, Southeast Asia, Iceland and elsewhere around the world. 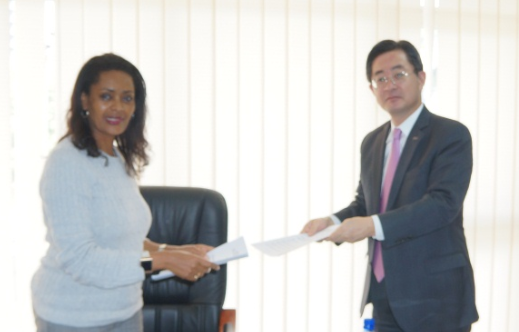 Ms. Azeba Asnake and Mr.Fujita Toyoaki have signed a memorandum of understanding