The companies succeed in prototyping a fuel assembly cover

TOKYO— Toshiba Corporation (Tokyo: 6502) and IBIDEN Co., Ltd. (Tokyo: 4062) today announced that the companies have established a manufacturing technology for a SiC-based material with outstanding heat and oxidation resistance, intended for reactor core applications in nuclear power plants. Toshiba and IBIDEN have successfully utilized the new technology to create a prototype of a fuel assembly cover.

Both companies have been collaborating with Nuclear Fuel Industries, Ltd., as well as Professor Yutaka Kagawa of the Research Center for Advanced Science and Technology (RCAST) of the University of Tokyo, and Professor Takashi Goto of the Institute for Materials Research of Tohoku University.

The fuel assembly cover was manufactured using a composite SiC material that consists of continuous SiC fiber  to provide reinforced strength. The new manufacturing technology achieves SiC layer formation at a speed approximately 20 times faster than the conventional method*1 by using chemical vapor deposition*2 (CVD), as well as the optimized layer formation apparatus and process. This speed-up has been considered necessary to make it possible to offer the fuel assembly cover material in production quantities.

The new manufacturing technology uses a machined mold (die) set based on a special carbonaceous material in order to form long SiC fiber in the shape of the fuel assembly cover. It also employs a long CVD reaction chamber to produce a SiC material exceeding four meters in length with high precision, without compromising density or strength. This technology can be used to create specially shaped items such as thin-wall, long cylinders. It can also be applied to the production of fuel cladding tubes.

For data collection and verification purposes, Toshiba and IBIDEN will begin the testing of the new fuel assembly cover in 2016 in a research reactor. The companies aim to but the cover practical use by around 2025, as a replacement part for operating nuclear power plants.

In line with its commitment to creating new value, IBIDEN will continue to offer products that contribute to the prosperity and well-being of society by combining its unique core technologies.

Toshiba and IBIDEN will exhibit the new manufacturing technology at the 22th International Conference on Nuclear Engineering (ICONE22), which will be held in Czech Republic starting on July 7.

Prototypes of the fuel assembly cover 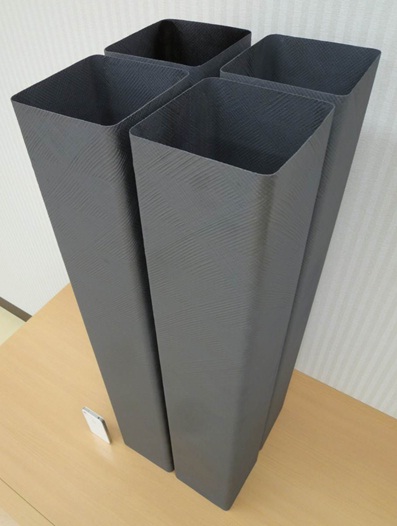 To find out about Ibiden, visit www.ibiden.com/index.html