TOKYO—Toshiba Corporation (TOKYO:6502) today announced its start of sales and marketing of a home energy management system (HEMS) and services in Europe with the launch of "Pluzzy". Initial sales have started in France today, promoted by Toshiba Systèmes (France) S.A.S. (TSF). The launch is the first step to enhancing Toshiba Group's home solution business in Europe, where progress in introducing renewable energy is driving efforts to save energy in the home.

Pluzzy is a modular system that allows connected households to visualize current and cumulative power consumption for the day, week, month and year; to measure the cost; and to set and manage consumption targets. It also tracks CO2 emissions. Smartplug, a component of Pluzzy, monitors energy consumption and allows programming and management of individual equipment. The overall system and individual settings, including remote control operation of lighting, heating and other equipment, can be accessed and controlled by a PC or network-connected TV, or a smartphone or tablet, which can also be used from remote locations outside the home.

As a modular system, Pluzzy is extensible. Its temperature and humidity sensor can be used to control the comfort of the home, and the motion sensor will switch off room lighting when it detects that a room is empty. Open door and the window sensor provide security.

"We are excited to launch our HEMS products and services in France, as we are convinced they will allow consumers to achieve not only enhanced home energy management but a better quality of life," said Ryuji Maruyama, General Manager of Toshiba's Smart Community Division. "We will steadily expand the HEMS business, including heating solutions for winter, and going forward we will launch Pluzzy in the U.K. and Germany. We aim to introduce the system to over 150,000 households or so in Europe in the next three years."

Europe is expected to see dramatic growth in penetration rates of home automation, energy management and security systems in the years to 2020. France is taking the lead, and plans to introduce smart meters from 2014. This move is expected to lead to the early introduction of hourly-based power rates, based on home meter data, and to promote the early adoption of HEMS compliant with the meters. 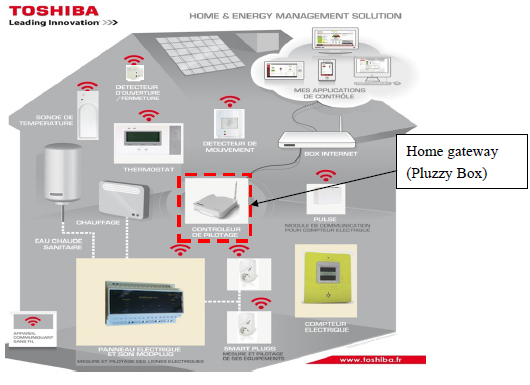 Screen Image for Visualization of Energy

Toshiba Systems (France) is a leader in France of digital products for both the consumer and professional market, for which it carries one of the most comprehensive offers in the market, including: laptops, tablets, TVs, digital cameras, storage .... Toshiba Systems (France) also participates actively in the development of Toshiba Group new activities, including : eco - technologies such as LED lighting, energy efficient solutions such as HEMS (Home Energy Management System) and BEMS (Building Energy Management System), cloud services, and addresses the new markets of e-health and e-education .... Since 2008, the company is led by Philippe Delahaye.
Website : www.toshiba.fr