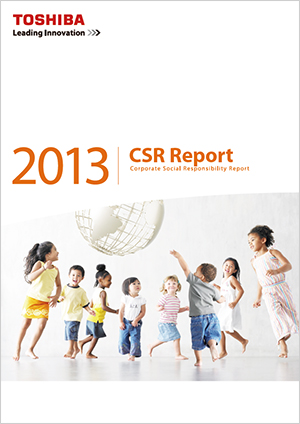 Toshiba has published the report since 2004 as a mean to provide the company's stakeholders with an authoritative resource on Toshiba Group's CSR policies, plans, programs and activities; this is the 10th edition. The Report is complemented by Toshiba's CSR website, which reports the latest news and provides video coverage of major activities.

The CSR Report 2013 can be downloaded as a PDF from Toshiba's CSR website, and readers can make their own version by selecting the topics they want to read.

As it has since 2010, reports follow the order of the seven core subjects defined by the ISO 26000 Guidance on social responsibility. Beyond that, the report also covers Toshiba's approach to CSR management and human rights issues in the supply chain, which stakeholders have identified as areas of high interest, and identifies priority themes for each of Toshiba Group's business domains, from the perspective of ISO 26000 core subjects and social challenges.

Toshiba Group strives to constantly act with unshakable integrity and aims to continue to be trusted as a "corporate citizen of planet Earth."

(2) The Report can be downloaded from the following site:
http://www.toshiba.co.jp/csr/en/report/download.htm

Details of Toshiba Group's CSR activities can also be found on the CSR website:
http://www.toshiba.co.jp/csr/en/index.htm