TOKYO—Toshiba Corporation (TOKYO: 6502) today announced the successful testing of a first-of-its-kind combustor to be used in a breakthrough thermal power generation system that produces low-cost electricity and little-to-no air emissions.

Step-by-step testing of the new combustor was initiated at a facility in California in January 2013, to confirm and demonstrate its operation within the new generation system's required environment: never before demonstrated high operating pressure and temperature, plus a unique combustion mixture of oxygen, natural gas and a high concentration of CO2. In July, the test program broke new scientific ground by confirming stable operation at the system's target pressure of 300 atmospheres, fully confirming Toshiba's design*.

The new thermal power plant uses a supercritical carbon dioxide (CO2) working fluid to produce very low-cost electricity while cutting emissions of nitrogen oxides (NOx), CO2, and other pollutants. CO2 is separated and collected at high-pressure without requiring additional carbon capture equipment or processes, enabling full carbon capture without increasing the cost of electricity. The captured CO2 can be subsequently sequestered or used for enhanced oil recovery (EOR), a well-proven process for dramatically increasing the production of mature oil fields. The result is affordable power generation without atmospheric emission of harmful greenhouse and other polluting gases.

The system operates at a very high pressure of 300 atmospheres, and the development of its key equipment – a new combustor and its related turbine – was a critical challenge. Toshiba met that challenge by applying its high-temperature, high-pressure combustion and cooling technologies to the design, development and manufacture of a novel, supercritical CO2 combustor and turbine for the power system.

The recent successful testing of the combustor is a major step towards the realization of this important and disruptive power system, and positions Toshiba as a global leader in the development of turbo-machinery for supercritical CO2 power plants. Toshiba will continue testing to generate additional new data while further demonstrating the operability of the combustor.

Toshiba is developing the system with three leading U.S. companies: NET Power LLC, the lead developer of the new power system; Chicago Bridge & Iron Company, a global engineering and construction provider; and Exelon Corporation, the leading competitive energy provider in the U.S. The four companies intend to demonstrate this emission-free system with a 25MW natural gas pilot plant in 2015 and a 250MW full-scale natural gas commercial plant by 2017.

Toshiba and its partners will promote sales of this new power system worldwide, with a special focus on the U.S. and the Middle East, where there is strong demand for EOR. Going forward, Toshiba will continue to contribute to the improvement of the power cycle, including its integration with coal gasification plants, as a major part of its commitment to the mitigation of climate change by supplying environmentally friendly power generation systems.

*
The combustor was engineered and manufactured in cooperation with Parametric Solutions Inc. (PSI), a US based gas turbine components engineering firm.

The new plant burns a mixture of natural gas and oxygen combined with CO2 to produce a working fluid gas, a mix of mainly CO2 and H2O, that is used to drive the turbine generator. This working fluid is then cooled through a heat exchanger and H2O is separated from it to create a nearly-pure CO2 stream. The CO2 stream is pressurized and a major part of this flow is fed back to the combustor to begin the cycle anew. The remaining part of the CO2 flow can easily be collected and put into a pipeline for storage or sequestration without increasing the power plant's cost of producing electricity. 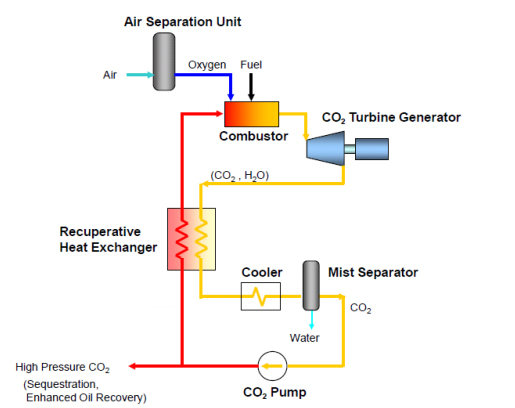