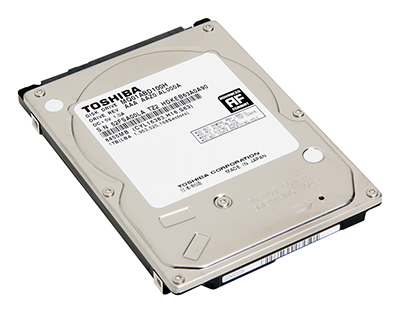 The new drives—the 1TB MQ01ABD100H and the 750GB MQ01ABD075H—use hard disks to deliver high level capacity and 8GB NAND flash memory as a cache memory to support high speed data throughput. As a result, read and write times are about three times faster*2 than in Toshiba hard disk drives with equivalent capacities. In PCs, the new Hybrid Drive reduces application boot times by about 40%*3. With a 2.5-inch form factor and high capacity, the new drives are ideally positioned as a high performance alternative for portable and desktop PCs.

In operation, data is allocated to one of the Hybrid Drive's three memory layers: DRAM buffer memory, NAND flash memory or the magnetic disk media. This process is enhanced by an algorithm that dynamically learns the user's data access pattern and stores data accordingly to the appropriate tier. High speed access is achieved by storing frequently accessed data in the NAND flash memory.

Today's PCs must meet increasingly strong demands for storage capacities that can handle multiple HD videos and other data-rich sources and a read/write performance that can meet the demands of ever faster CPU and graphics chips. Through the synergy of state-of-the-art NAND flash memory manufactured with the latest generation of process technology and by leading-edge miniaturizing technique and high speed, high capacity HDD, Toshiba now offers business and consumers the solution of the Hybrid Drive, a large capacity drive that matches the capacity of HDD with data access speeds like the SSD.

Toshiba's Hybrid Dive technology integrates NAND flash memory (8GB of 32nm SLC) and a self-learning caching algorithm for data writing. The three tiers of memory, DRAM, NAND flash memory and hard disk media all have different read/write speeds, and data is allocated into them as appropriately by the algorithm, as it learns the user's data access pattern when the system is in operation. High speed access is achieved by storing frequently accessed data to the NAND flash memory.

(1) Halogen-Free and Antimony-Free Products*4
These HDD products are halogen- and antimony-Free.

(2) RoHS compatible*5
The new drives are compatible with the European Union's RoHS directive on the elimination of six hazardous substances in electrical and electronic equipment.

Environmental Vision 2050 guides Toshiba Group in achieving a ten-fold increase in overall eco-efficiency by 2050, compared to 2000, in order to contribute to the future of a sustainable Earth as a "corporate citizen of planet Earth". Toward this goal, we promote initiatives aimed at realizing a world where people lead affluent lives in harmony with the Earth, based on the concept of three "Greens": Greening of Process (environmentally conscious manufacturing process), Greening of Products (environmentally conscious products) and Greening by Technology (contributing through environmental technology).

Note:
[1]
One terabyte (1 TB) is 10 12 =1,000,000,000,000 bytes, One Gigabyte (1 GB) is 10 9 =1,000,000,000 bytes and One Megabyte (1 MB) is 10 6 =1,000,000 bytes. A computer operating system, however, reports storage capacity using powers of 2 for the definition of 1TB = 2 40= 1,099,511,627,776 bytes, 1GB = 2 30= 1,073,741,824 bytes and 1MB = 2 20= 1,048,576 bytes, and therefore shows less storage capacity. Available storage capacity (including examples of various media files) will vary based on file size, formatting, settings, software and operating system.
[2]
Compared to Toshiba's existing model MQ01ABD Series. Based on Toshiba's evaluation using PCMark TM Vantage. PCMark TM is a trademark of Futuremark.
[3]
Based on Toshiba's evaluation to compare the Hybrid Drive with Toshiba's existing model MQ01ABD100 and also Toshiba's SSD THMSNF Series in case starting the applications of (Microsoft Outlook® + Microsoft Excel® + Microsoft® Word + Microsoft PowerPoint®) simultaneously. Microsoft®, Outlook®, Microsoft Excel®, PowerPoint® are registered trademark of Microsoft Corporation in USA and other countries.
[4]
Toshiba Semiconductor & Storage Products Company defines halogen-free and antimony-free solid state drive (SSD) or hard disk drive (HDD) products as those meeting all of the following requirements:
(a) containing bromine (Br) and chlorine (Cl) in no more than 900 parts per million (ppm) by weight for each element, and containing bromine and chlorine in an aggregate amount not exceeding 1500 ppm by weight; and (b) containing no more than 1000 ppm antimony (Sb) by weight.
For the avoidance of doubt, Halogen-Free/Antimony-Free SSD or HDD products may not be entirely free of bromine, chlorine, or antimony, and may contain any other element of the halogen family.
[5]
Toshiba Semiconductor & Storage Products Company defines "RoHS Directive" as the Directive 2002/95/EC of the European Parliament and of the Council of 27 January 2003 on the restriction of the use of certain hazardous substances in electrical and electronic equipment.
[6]
One Mebibyte (1MiB) is calculated as 1,048,576 (=2 20) bytes.
[7]
Energy consumption efficiency is calculated based on power consumption divided by formatted capacity, as defined by Japanese law.