-- To show the artistry of Chuson-ji Temple's Golden Hall and its artifacts
in a warm, natural light and encourage tourism -- 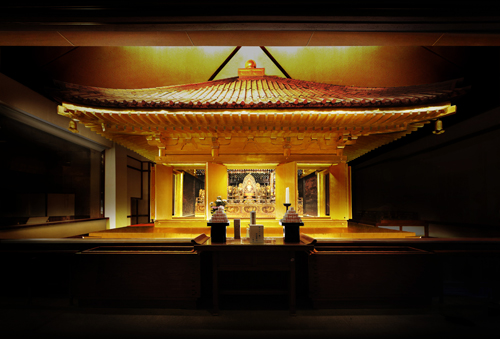 TOKYO—Toshiba Corporation (TOKYO: 6502) today announced that Toshiba Group has donated and installed LED lighting and a photovoltaic power system to illuminate the Golden Hall at Chuson-ji, a Buddhist temple and UNESCO World Heritage Site in Iwate prefecture, northeast Japan. The lighting will be switched on at a ceremony at the temple on September 22.

Chuson-ji is the most famous of five sites making up the Hiraizumi World Heritage Site, a complex of temples and gardens forming an earthly representation of the Buddhist Pure Land, or Nirvana. The temple, a Special Historic Site that dates back to the 12th century, is best known for the Konjikido, the Golden Hall, recognized as one of world's most beautiful and elaborately decorated buildings.

The philosophy of Chuson-ji is to live in peace and in harmony with nature, and the temple compound is renowned for its atmosphere of serenity and spirituality. Toshiba has respected this in its work at the temple and the lighting of the Golden Hall.

The photovoltaic system has a 5kW output capacity that feeds into the temple power supply, and more than compensates for power consumed by the LED lighting. The system is built on the roof of the souvenir shop near the Golden Hall, with no visible impact on the temple's scenic beauty, and respects the philosophy of Chuson-ji by delivering natural, renewable energy. Even more care has been taken with the lighting of the Golden Hall, in respect of its historic and cultural importance.

A wooden building entirely covered in maki-bashira gold leaf, supported by pillars intricately decorated with mother of pearl and maki-e lacquer in gold and silver, the Golden Hall houses three altars. Each is adorned with statues representing a seated Amida Buddha, surrounded by other standing bodhisattva: Kannon and Seishi, six Jizo and two Niten (though one Niten is missing). The Golden Hall is now protected from the elements by a concrete outer structure, the Shin-Oido.

Lighting engineers from Toshiba Group companies carried out on-site investigation and extensive simulations to support the design and development of non-intrusive fixtures and lighting that not only provides interior and exterior illumination but a warmth and brilliance that renders lively, natural colors free of glare. The lighting is designed to complement the decoration and the artifacts, not to compete with them, and to make it seem as if the light originates within the objects, not outside them.

Chuson-ji is in Tohoku, the region devastated by the March 2011 earthquake, which is still working for a full recovery from the disaster. Under the "Toshiba Tohoku ASHITA (Future) Plan," Toshiba Group is supporting Tohoku's efforts for self-initiated recovery with a number of projects that are evaluated and adjusted for appropriate content and timing. In providing LED lighting and renewable power for Chuson-ji, Toshiba hopes to help encourage more tourists to visit the wider Tohoku region.

The Konjikido is the second UNESCO site that Toshiba has illuminated with its state-of-the-art LED lighting and fixtures. The company is now in the second phase of installing LED lighting at the Louvre in Paris, where it has already lit up the main and smaller pyramids and Napoleon Square. This year it will illuminate the Mona Lisa, the Red Room gallery that is home to many large and well-known paintings, and the main entrance, the Napoleon Hall.

Chuson-ji was established in the 12th century by Kiyohira Fujiwara, lord of the Fujiwara family, following two bitterly contested wars. Fujiwara lost his father, wife and children in these conflicts, yet he realized that hatred and revenge could never heal the sorrow. Instead he offered a pledge before Buddha to console the spirits of the dead, whether friend or foe, human or animal. This spirit has guided Chuson-ji ever since. The temple is recognized by the Japanese government as a Special Historical Site, and in 2011 was named by UNESCO as a World Heritage Site as part of the Hiraizumi temple and garden complex. Chuson-ji is a famous destination for both Buddhists and tourists.

The Toshiba East Japan ASHITA (Future) Plan supports the self-initiated recovery in Iwate, Miyagi and Fukushima prefectures. Its five core measures, shown below, focus on creating employment by supporting recovery in basic industries damaged by the 2011 earthquake. This year, Toshiba will channel approx. 500 million yen to the plan, including support for a university scholarship fund that the company set up last year.