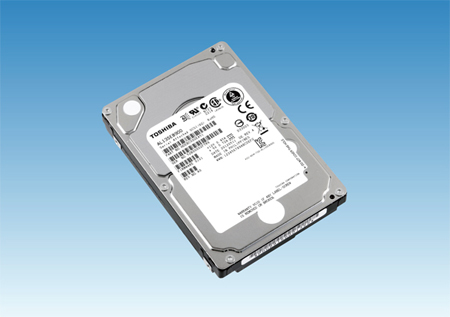 TOKYO—Toshiba Corporation (TOKYO: 6502) today announced the launch of a line-up of four 2.5-inch enterprise HDDs with a 10,500 RPM rotation speed. The new drives include the AL13SEB900, which offers a 900GB[1] capacity, the industry's highest class[2]. Volume shipment will start in August.

An improved magnetic recording head and disk magnetic layer give the AL13SEB900 an areal density of 856Mbit/mm2 (552Gbpsi) and realizes a 900GB capacity, the industry's highest class. The internal transfer rate is 286 MB/s, a boost of approximately 32% against the previous generation MBF2600RC[3], due to improved liner recording density.

The energy consumption efficiency[4] of AL13SEB900 is approximately 41% higher than that of its predecessor, MBF2600RC, due to lower power consumption by the controller IC and increased storage capacity. The AL13SEB900 family is also compatible with the European Union's RoHS directive[5] and is Halogen-Free/Antimony-Free [6].

Demand for 2.5-inch HDD for enterprise applications is growing, as they have a smaller footprint and overall size and consume less power than 3.5-inch drives, while offering high level processing speeds and generating less heat.

Toshiba will meet the demand for enterprise applications, such as servers and storage systems by enhancing its line-up of 2.5-inch HDD with high capacity drives operating at 10,500 RPM.

Environmental Vision 2050 guides Toshiba Group in achieving a ten-fold increase in overall eco-efficiency by 2050, compared to 2000, in order to contribute to the future of a sustainable Earth as a "corporate citizen of planet Earth". Toward this goal, we promote initiatives aimed at realizing a world where people lead affluent lives in harmony with the Earth, based on the concept of three "Greens": Greening of Process (environmentally conscious manufacturing process), Greening of Products (environmentally conscious products) and Greening by Technology (contributing through environmental technology).

Notes:
[1]
One Gigabyte (1 GB) is 10 9 =1,000,000,000 bytes. A computer operating system, however, reports storage capacity using powers of 2 for the definition of 1GB = 2 30= 1,073,741,824 bytes, and therefore shows less storage capacity.  Available storage capacity (including examples of various media files) will vary based on file size, formatting, settings, software and operating system.
[2]
As of July 11, 2012, for enterprise HDD with a rotation speed of over 10,000 RPM. Source: Toshiba
[3]
Compared to MBF2RC 600GB model launched in 2010
[4]
Energy consumption efficiency is calculated based on power consumption divided by formatted capacity, as defined by Japanese law.
[5]
Toshiba Semiconductor & Storage Products Company defines "RoHS Directive" as the Directive 2002/95/EC of the European Parliament and of the Council of 27 January 2003 on the restriction of the use of certain hazardous substances in electrical and electronic equipment.
[6]
Toshiba Semiconductor & Storage Products Company defines Halogen-Free/Antimony-Free solid state drive (SSD) or hard disk drive (HDD) products as those meeting all of the following requirements:
(a) containing bromine (Br) and chlorine (Cl) in no more than 900 parts per million (ppm) by weight for each element, and containing bromine and chlorine in an aggregate amount not exceeding 1500 ppm by weight; and (b) containing no more than 1000 ppm antimony (Sb) by weight.
For the avoidance of doubt, Halogen-Free/Antimony-Free SSD or HDD products may not be entirely free of bromine, chlorine, or antimony, and may contain any other element of the halogen family.
[7]
Comparison based on MBB2147RC (Year 2007 model). Based on Toshiba's evaluation method of LCA (Life Cycle Assessment)
[8]
One Mebibyte (1MiB) is calculated as 1,048,576bytes.
[9]
Category names defined by Japan's Ministry of Economy, Trade and Industry are applied in the Japanese market.