Details of the SoC and its development will be presented at the 2012 IEEE Symposia on VLSI Technology and Circuits in Honolulu, Hawaii on June 15[2].

Recent advances in multimedia processing, including video encoding and decoding and image recognition, have relied on multi-core processors that combine high performance with low power consumption. Many-core processors go a step further; by increasing the number of cores they boost SoC performance to much higher levels. However, the power consumption and size of many-core SoC have been problems for their use in embedded applications. Toshiba's many-core SoC secures significant advances in performance while maintaining low power consumption and a cluster size of 84 mm2 , suitable for embedded applications. 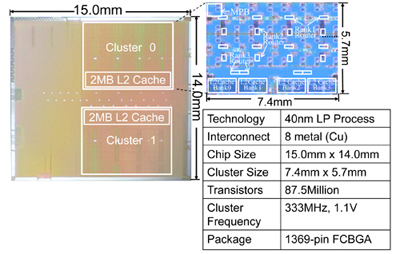