Paris, Tokyo—Toshiba Corporation (TOKYO: 6502) today announced that it has reached a basic agreement with the Louvre Museum to replace part of the interior lighting of the Louvre with its own LED lighting. This is Phase 2 of a renovation project that Toshiba Corporation and the Louvre Museum have pursued in partnership since 2010. This next project phase will see renovation of LED lighting in important interior spaces of the museum. It includes specific exhibit lighting for Leonardo da Vinci's Mona Lisa, and for the Red Rooms, which display famous masterpieces such as Jacques-Louis David's Consecration of the Emperor Napoleon I and Coronation of the Empress Josephine, as well as the Napoleon Hall, the Louvre's main entrance.

Under a partnership agreement with the Louvre (term: June 30, 2010 to December 31, 2023), Toshiba has already lit up parts of the Louvre's exterior, including I.M. Pei's Pyramid. The implementation of the second phase of the project is testament to the successful collaboration between Toshiba and the Louvre Museum in balancing environmental and aesthetic considerations during the exterior lighting renovation phase.

Part of the LED lighting replacement work, which included the Pyramid, Pyramidion and the Colbert Pavilion, was completed last December, and installation of LED lighting for the whole of Cour Napoleon, the first phase of lighting renovation, was completed on May 12. It has taken approximately two years, since the project commenced in June 2010, for all the lighting in the Cour Napoleon to be converted to LED. Renovation of LED lighting in the Cour Carre is also scheduled to complete in 2013.

Through the renovation of exterior lighting, Toshiba and the Louvre Museum is reducing power consumption by 73% without compromising the visual beauty of the museum. The renovation process involved repeated consultations with the Historical Monuments Committee and the Architecture and Heritage Service. This partnership has pursued artistic integrity in the LED lighting from every conceivable perspective: the shape of the fixtures, illumination brightness, color tone and installation angle, to achieve a lighting finish that respects the scenery of Paris. The fusion of French artistry with Japanese technology that Toshiba has promoted has been realized ultimately through numerous innovations. Toshiba will continue to refine its technical skills in the pursuit of the potential of LED lighting.

Since April 2010 Toshiba Corporation has undertaken new lighting projects on a global scale as part of its approach to creating a new lighting culture in harmony with people and the environment. Toshiba perceives this project as an important exemplar of how to extend the longevity and sustain the aesthetic integrity of world heritage sites. As one of the world's foremost eco-conscious companies, Toshiba will further enhance its technical capabilities through experience gained at the Louvre, while contributing to global culture and the mitigation of environmental burdens.

1. Main content
Toshiba Corporation will supply LED lighting for the Mona Lisa, the Red Rooms and Napoleon Hall and provide financial support for the renovation. The number of fixtures has not yet been determined.

Leonard Da Vinci's portrait, regarded as symbolic of the Renaissance. It is one of the most popular works in the whole of the Louvre. That distinctive smile is known as the "Mona Lisa smile" and has beguiled many. The Mona Lisa shows skillful use of techniques like the aerial perspective as well as sfumato (soft-edge), the painting mode devised by Da Vinci, and has had a profound effect on western painting.

These display rooms showcase a series of great masterpieces representative of the 19th century. The rooms are visited by the majority of museum visitors for the spectacle of large-scale works like David's Consecration of the Emperor Napoleon I and Coronation of the Empress Josephine and Delacroix's Liberty Leading the People, all exhibited on their red walls.

This is the main entrance of the Louvre, the face of the museum that greets all visitors. Located on the lower ground floor, it houses the ticket box and information desk.

For further information on Toshiba's collaboration with the Louvre, please visit  http://www.toshiba.co.jp/lighting/about/louvre.htm 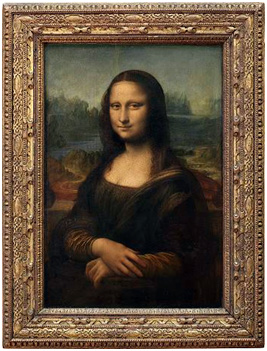 Cour Napoleon where lighting has been converted to LED. 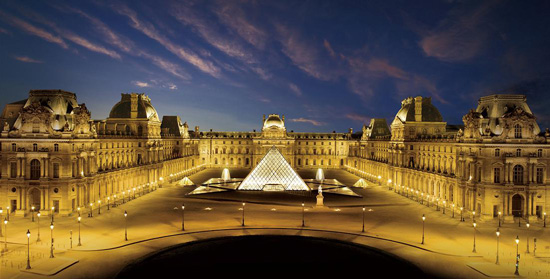