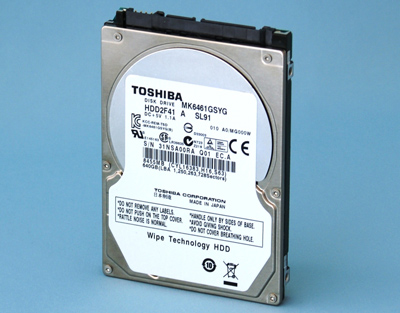 TOKYO— Toshiba Corporation (TOKYO: 6502) today announced the launch of the world's first[1] series of Self-Encrypting Drives (SED) equipped with Wipe Technology, Toshiba's proprietary suite of security functions that bring an unsurpassed level of data protection to IT equipment. Wipe Technology allows users to determine a range of security settings, including invalidation of encryption keys and data invalidation when a drive is removed from its housing or connected to an unauthorized host system.

The five models in the 2.5-type MK6461GSYG family range from 160 gigabytes (GB) to 640GB and are designed for use in copiers, printers, POS systems, PCs and other IT devices. Sampling will start from the end of April with mass production following at the end of June.

IT departments must contend with various security risks, from lost and stolen PC through to compliance with increasingly strict privacy laws and regulations governing data security. These concerns also go beyond PCs. Today, most office copier and printing systems utilize HDD capacity and performance to support productivity and the security of recorded document image data that must be maintained. Furthermore, data invalidation required overwriting for hours or physically disrupting until now.

Wipe Technology directly addresses these concerns. In August 2010, Toshiba announced development of the Wipe Technology that offered users two levels of control, which achieved great interest from the IT industry. Reflecting voice of customers to meet varying using conditions, MK6461GSYG family drives not only offer the latest version of Wipe Technology adding the third level of control, but also configure areas for invalidation and encryption, achieving an optimized solution for data security.

1. Invalidation of all data by the system

This invalidates all data. This feature is designed for use prior to system disposal or re-purposing to ensure that private data never leaves the control of the responsible business unit or the IT department.

2. Invalidation of data on powering down

The HDD encryption key is automatically invalidated when the drive's power supply is turned off. If a Wipe Technology SED drive is removed from a system, it can be set to invalidate all data on the drive.

3. Invalidation of data when the equipment is connected to an unauthorized system (The new technology which was added this time)

When an SED HDD is inserted into a system it triggers "challenge response[2]"authentication to confirm the system is known to the HDD. If the authentication fails, the HDD automatically deletes the encryption key. This level counteracts attempts to read a drive by physically removing it from a secure host system and installing it in another system.

Wipe Technology HDD can be incorporated into existing system architectures and integrated into various IT equipments where users demand a high level of data security, including multifunction printers, POS systems and PCs. Toshiba is now studying future integration of the technology into solid state drives (SSD).

Toshiba Group will adopt Wipe Technology SED HDD into enterprise use such as its own brand PCs, multifunction printers, and POS system, as a further advance in enhanced information security for information and communications technology.

Outline of the products

The new drives comply with the European Union's RoHS Directive on the restriction of the use of six hazardous substances in electrical and electronic equipment.

The new drives lead to less electrical power, laborsaving, and enable re-purposing storage products, by shortening time by immediate invalidation of the data, compared to overwriting for hours or physically disrupting, which was required until now.

Environmental Vision 2050 guides Toshiba Group in achieving a ten-fold increase in overall eco-efficiency by 2050, compared to 2000, in order to contribute to the future of a sustainable Earth as a "corporate citizen of planet Earth". Toward this goal, we promote initiatives aimed at realizing a world where people lead affluent lives in harmony with the Earth, based on the concept of three "Greens": Greening of Process (environmentally conscious manufacturing process), Greening of Products (environmentally conscious products), and Greening by Technology (contributing through environmental technology).

[1]
As of April 13, 2011; source Toshiba
[2]
Challenge-response authentication is a family of protocols that uses the random number for every authentication to prevent the wire-tap attack.