TOKYO—Toshiba Corporation (TOKYO: 6502) today announced that it has won a major contract to develop a mega solar photovoltaic power generation system for Tohoku Electric Power Co., Inc. (TOKYO: 9506), under which Toshiba's systems will be installed in the Hachinohe Solar Power Station in Hachinohe, Aomori prefecture. Once completed, the project will have a generating capacity of approximately 1.5MW.

The Hachinohe Solar Power Station is located in Hachinohe Thermal Power Station Site in Hachinohe, Aomori prefecture. The first industrial-use solar photovoltaic power plant operated by Tohoku Electric, it is scheduled to come on line in 2011. The plant will have an annual capacity of approximately 1.6 million kilowatt hours, sufficient to generate electricity for approximately 500 households.

Toshiba was selected as prime contractor for development of the plant, and will be responsible for all engineering work prior to the start of construction, procurement of major equipment and components, and plant construction. The variable output of the photovoltaic cells will be converted to clean AC by integrated power conditioners developed by Toshiba Group. Their conversion efficiency of 98.1% places them in the world's highest class of 500kW power conditioners, and will be the first to be installed in a mega solar photovoltaic project.(1) The plant will also be equipped with highly efficient multi-crystal photovoltaic modules from Kyocera Corporation, thin-film photovoltaic modules (250kW) from Kaneka Corporation and CIS (Copper Indium Diselenide; CuInSe2) thin-film solar cell modules (250kW) from Solar Frontier K.K.

Driven by a growing awareness of the need to counteract global warming, the global market for solar photovoltaic systems for utilities and industrial plants is expected to reach 2.2 trillion yen in fiscal year 2015. In this environment, Toshiba is charged with drawing on its extensive experience in system integration, particularly in system technology for high efficiency photovoltaic inverters and microgrids and in deploying large plant system engineering capabilities, to promote the growth of its photovoltaic systems business.

Toshiba Group will aim to secure further contracts for multi-MW PV projects and to achieve a rapid expansion of the business, both in Japan and overseas, by focusing on renewable energy and energy-saving products and technologies. 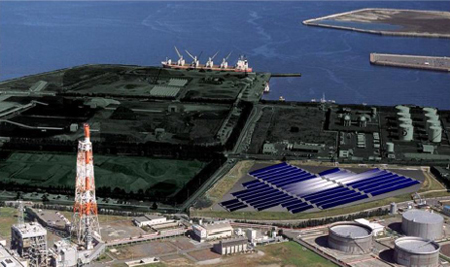