Toshiba LEDs to light up the Louvre Museum

TOKYO— Toshiba Corporation (TOKYO: 6502) today announced that it has concluded that it will help to light up one of the world's most popular museums under a partnership agreement with the Louvre Museum in its lighting renovation project. Under the agreement, Toshiba will support lighting renovations in some of the museums most visited public spaces with provision of its state-of-the art LED lighting and renovation costs.

As one of the world's most popular museums, the Louvre is aware of the need to replace energy consuming xenon lighting with an environmentally friendly solution. Toshiba is able to deliver this with its energy saving low-CO2 LED lighting, and will use its industry-leading products to illuminate some of the Louvre's most familiar spaces: Under its partnership agreement, Toshiba will provide the LED lighting for the Pyramids that greets visitors as they approach the museum, the Napoléon Court, and the Cour carrée, the main entrance to the museum. Renovation and installation of the Napoléon Court and the Pyramid will be completed within 2011, and the Cour carrée is expected to be renovated within 2012.

Alongside environmental concerns, the Louvre must assure lighting that conveys the intrinsic beauty of the museum and its spirit as the home to some of the world's greatest art. Toshiba also understands this, and has the technology for the task. The company recognizes that lighting is much more than a means to brighten public spaces, and that LED lighting can do much more than contribute to saving energy. Light has an emotional power that creates atmosphere and enriches life. Toshiba celebrates this quality as akari, a Japanese concept that conveys the ability of lighting to appeal deeply to our senses and emotions. It will seek to convey this understanding at the Louvre.

Toshiba is taking its new lighting system business to a global level, with initial promotions in such regions as France, Germany, and the UK. Toshiba LED lamps have been available at retailers in France since this January. By further promoting its business, Toshiba aims 350 billion sales in FY2015.

As one of the world's foremost eco-companies, Toshiba Group takes a proactive approach to creating value and promoting lifestyles in harmony with the Earth. In line with this principle, the company ceased production of general incandescent bulbs this March. Toshiba will further promote environmentally conscious management by working to mitigate global warming and make efficient use of resources.

Overview of the partnership

Toshiba will provide LED lamp equipment and the cost of renovation for the Pyramids, the Napoléon Court, and the Cour carrée.

About the Louvre Museum

The Louvre Museum, the French national museum since 1793, is one of Europe's oldest and most storied museums. It is also one of the world's largest museums, comparable in scale to New York's Metropolitan Museum, and the most visited, opening its doors to 8,500,000 people a year. The museum is part of "Paris, Banks of the Seine", which was registered as a UNESCO World Heritage Site in 1991.

Image of the Louvre Museum: the Napoléon Court and the Pyramids 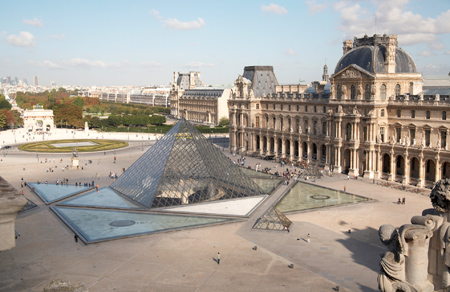