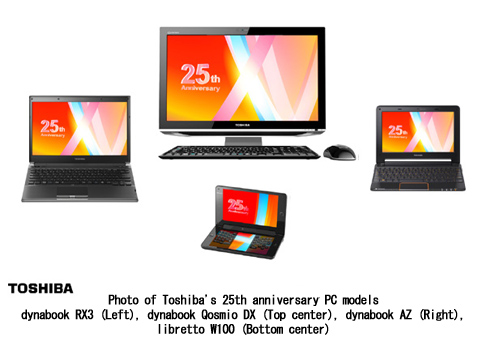 Toshiba Corporation (TOKYO: 6502), the industry pioneer in mobile computing, today announced that it will celebrate 25 years of innovation in the portable PC business with the launch of the "libretto W100", the world's first[1] dual touch-screen Windows mini-notebook PC, and three other products available in seven different models. The new line-up will be rolled out in the Japanese market this summer, with the first products on shelves on June 25, 2010.

Alongside the new libretto, Toshiba is introducing new models in key market segments. The sleek "dynabook RX3" is the world's lightest[2] 13.3-inch Wide LCD  display laptop. The eye-catching "dynabook Qosmio DX" is an all-in-one[3] AV PC that offers a full HD 21.5-inch wide LCD display and the world's fastest[4] write times to Blu-ray discs. And the "dynabook AZ", a new internet-dedicated device, a "cloudbook" is the world's first[5] network device integrating the "NVIDIA® TegraTM250 Processor" and a hardware keyboard with the AndroidTM[6] platform.

With these new products, Toshiba builds on a 25-year tradition of creativity in computing that has seen it develop ground-breaking products and trailblaze new markets. The company is now aiming for annual global shipments of 25 million units by introducing PCs that meet customer needs in both advanced and emerging market.

Toshiba's excellence in high-density mounting and engineering have created a unique, pocket-sized companion, with distinctive dual 7.0-inch Wide LCDs that offer a display equivalent to a 10.0-inch wide screen. The clamshell case opens like a book or a notebook PC to reveal the world's first Windows® platform to integrate dual touch-sensitive screens. Used as a PC, the libretto displays a haptic keyboard on the lower screen; held vertically, it becomes an ebook reader that displays a double-page spread. Compact and only 699 grams, the libretto W100 is a "mini-note PC" that can go everywhere.

The world's lightest notebook PC integrating a 13.3-inch wide LCD display demonstrates that cutting-edge performance can be combined with a reasonable price. Despite its slim lines, the dynabook RX3 integrates an optical disk drive, a standard voltage CPU and a battery that delivers a maximum life of approximately 11 hours[8]. All this is housed in a highly durable honeycomb-structured chassis that allows this versatile PC to achieve the lightest weight in its category – a mere 1.25kg.

The full HD 21.5-inch Wide LCD display of this stylish and space-saving all-in-one AV-PC says that it is something special—and it is, not least of all because of its Toshiba Quad Core HD Processor SpursEngine™[9], a dedicated image processor with advanced performance derived from the multi-core technology of the Cell Broadband Engine™[10]. Among its many capabilities, the SpursEngine™ offers the world's fastest write times to Blu-ray discs, and also boosts recording density, allowing recording of up to approximately 1,048 hours [11] of terrestrial digital programs – eight times as long as when recorded in its original density[12]. Another unique capability is its "Super Resolution Technology", which upscales SD video sources, such as video recorded on a camcorder, to near full HD picture quality, for bringing to the screen or saving to Blu-ray Discs. Toshiba's advanced power management technology give the dynabook Qosmio DX a level of energy efficiency[13] rare in an all-in-one PC, and earned the new PC a Green Mark, only given to products that meet the Japanese standard for energy saving.

This groundbreaking "cloudbook" is always on and Internet ready. Ultraslim and only 870 grams, the dynabook AZ nonetheless offers users all they need: the dynabook AZ is the world first[5] clam-shell type network device featuring the "NVIDIA® TegraTM250 Processor", a 10.1-inch Wide LCD with LED backlighting and the full size keyboard of a netbook on the AndroidTM 2.1 platform. With the dynabook AZ, Toshiba combines the best of two product categories: the operability, large screen and full-size keyboard of a PC, with instant start-up and power consumption similar to a smartphone, which enables it to remain in standby mode for up to 180 hours[14]. Adoption of the "NVIDIA® TegraTM250 Processor" and an HDMI output realizes outstanding AV performance, including connection to an HDTV for display of high definition content.

Note:
[1]
As of June 2010. Source: Toshiba
[2]
RX3/T9M. In the category of ODD-integrated 13.3-inch Wide LCD Notebook PCs. When attached with the battery pack 61AA. (As of June, 2010. Source: Toshiba)
[3]
Space-saving PCs with the main body built in the LCD.
[4]
In the category of commercially-available consumer PCs. Professional PCs such as authoring-system PCs are excluded. Comparision is based on writing process to Blu-ray discs includes editing of content and changing of video codec and bit rates (As of June, 2010. Source: Toshiba)
[5]
As of June 2010. Source: Toshiba
[6]
Android is a trademark of Google Inc.
[7]
One Gigabyte (1GB) means 10 9 = 1,000,000,000 bytes and One Terabyte (1TB) means 10 12 = 1,000,000,000,000 bytes using powers of 10.  A computer operating system, however, reports storage capacity using powers of 2 for the definition of 1GB= 2 30 = 1,073,741,824 bytes and 1TB = 2 40 = 1,099,511,627,776 bytes, and therefore shows less storage capacity.  Available storage capacity (including examples of various media files) will vary based on file size, formatting, settings, software and operating system and other factors.
[8]
RX3/T9M. Measured by JEITA Measurement Method Ver.1. (WiMAX Off.) Battery life will vary according to status of use and configuration.
[9]
SpursEngine TM and the logo are trademarks of Toshiba Corporation.
[10]
"Cell Broadband Engine" is a trademark of Sony Computer Entertainment Inc.
[11]
When operated on 32bit OS. This is a rough figure when recorded on both C drive (max. capacity: 398GB) and D drive (max. capacity: 53GB) on EP mode (approx. 2.0Mbps)
[12]
Comparison between recording digital terrestrial HD TV programs (approx. 17Mbps) on TS mode (approx. 17Mbps) and on EP mode (approx. 2.0Mbps). The picture quality is degraded in this case.
[13]
Energy consumption efficiency is calculated in accordance with the Law Concerning the Rational Use of Energy in Japan, which was enacted in 1979 to promote energy conservation and reduce energy consumption. The Law Concerning the Rational Use of Energy was most recently revised in 2009 with specific measurement criteria reflected in the specification indicated. Calculation of Energy consumption is dividing consumed energy by the capacity. The consumed energy and capacity shall be measured and specified by the Law Concerning the Rational Use of Energy. The DX is based on the standard in 2011 and achieves energy consumption efficiency of over 100%.
[14]
Battery life in standby mode will vary according to usage environment.