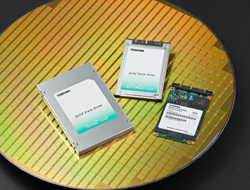 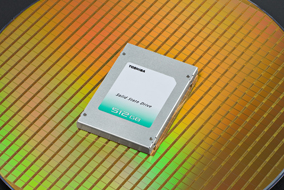 TOKYO--Toshiba Corporation (Tokyo: 6502) today announced the expansion of their line up of NAND-flash-based solid state drives (SSD) with the industry's first 2.5-inch 512-gigabyte (GB) SSD and a broad family of fast read/write SSDs based on 43 nanometer (nm) Multi-Level Cell NAND. The new drives provide a high level of performance and endurance for use in notebook computers, gaming and home entertainment systems, and will be showcased at International CES 2009 in Las Vegas, Nevada from January 8 to 11, 2009.

In addition to the 2.5-inch, 512GB drive, the 43nm NAND SSD family also includes capacities of 64GB, 128GB, and 256GB, offered in 1.8-inch or 2.5-inch drive enclosures or as SSD Flash Modules. Samples of the new drives will be available in first quarter (January to March) 2009, with mass production in the second quarter (April to June) 2009.

Toshiba will continue to promote innovations that widen the horizons of the NAND Flash market and support its continued leadership in that market. The company will spur demand for SSD in notebook PCs, netbooks and digital consumer products by enhancing its lineup, offering products with different densities and interfaces in a range of packages, while advancing device performance.

Outline of the new products