Toshiba Group is working to reduce waste generation by minimizing the volume of waste generated per unit production, which indicates business process efficiency improvement, as well as by reducing the total volume of waste to a level that does not exceed the Earth's environmental capacity.

In FY2020, the volume of waste (excluding that of objects with value) totaled 26,000 tons. The total volume of waste generated per unit production was 74% compared to that of FY2013, achieving the target.

Waste is a matter of concern to all employees. We have decided to promote measures at all workplaces having all employees participate, focusing first of all on not generating waste and aiming to improve the recycling rate. At each stage of design, development, production, and distribution, we give thorough consideration to reducing, recycling, and facilitating waste disposal. We monitor the composition of waste and promote the reduction or elimination of hazardous substance content, as well as thorough sorting and storage.

* The target values are for the waste volume only.

Breakdown of the waste volume (FY2020)

In FY2020, Toshiba Group recycled 66,000 tons of resources, and 96% of the total volume of waste generated was reused effectively as various resources. The recycled resources consisted mainly of scrap metal, waste paper, and wood chips, and 89% of them were used effectively for material recycling (recycled into materials for products), and the remaining 11% for thermal recycling (heat recovery). In the future, Toshiba Group will continue to increase the total volume of resources recycled and at the same time will strive to raise the quality of recycling chiefly by increasing the percentage of resources recycled into materials.

Breakdown of the volume recycled (FY2020)

Toshiba Industrial Products and Systems Corporation manufactures iron cores for generators used in hybrid electric vehicles. Its iron core stamping process had generated raw material losses. The company was faced by the challenge of reducing losses and costs through more efficient production methods and saving resources to reduce environmental impact.
Accordingly, the company used its original technologies – a large high-precision mold technology and a technology – to stabilize the conveyance of thin and wide rolled materials and improved the stamping method from single-row punching to triple-row punching. This improved the material yield by 9.4% and achieved resource saving. Triple-row punching, which punches three rows of iron laminations with a single press punch, realized a 2.9-fold improvement in production efficiency and reduced the energy used during manufacturing, thus achieving high-efficiency manufacturing. 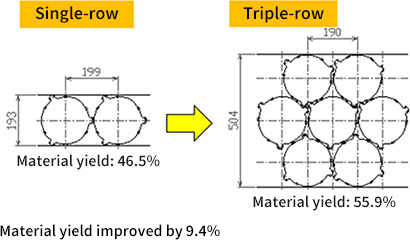 Case: Reducing the amount of timber used for wooden boxes at a Chinese site

Lumbering in forest, which plays a role in preventing global warming; illegal waste dumping; waste plastics; and other issues brought about by the mass-production, mass-consumption society and lifestyles greatly impact the environment.
When delivering escalator products to customers, Toshiba Elevator (Shenyang) uses wooden boxes to pack and transport parts. The amount of timber used for such boxes and the volume of waste generated after transport have been issues. Thus, the company worked to improve the packing method for parts in an attempt to reduce the number of wooden boxes used and the volume of such packing boxes. As a result, the company is expected to reduce the amount of timber used by approximately 13 tons per year and to significantly reduce the volume of waste generated in FY2020.

Himeji Operations-Semiconductor manufactures discrete semiconductor. Discrete semiconductor is packaged with a mold resin to protect semiconductor chips. However, burrs* form on the mold resin during manufacturing and abrasive is applied to remove burrs. Since the abrasive is used by dissolving it in water, its concentration must be managed. Before making the improvement, the worker regularly stopped the abrasive projection machine, let the abrasive precipitate, and then added abrasive according to the amount of precipitation. In this improvement, we have installed a fiber sensor which indicates the abrasive concentration in real time, allowing us to optimize the interval and amount to add abrasive. Through this optimization, we have been able to reduce the amount of abrasive used by 600 kg in a year.

At TOSHIBA TEC SINGAPORE PTE LTD, reducing wooden pallets that had been disposed of as waste was an issue for concern. Previously, parts for printer manufacturing delivered from suppliers were packaged in cardboard boxes and stacked on wooden pallets, and such pallets that were no longer necessary after shipment were disposed of as waste.
Therefore, TOSHIBA TEC SINGAPORE created platform trucks that can be reused as alternatives to wooden pallets and requested suppliers to continuously use these platform trucks for delivery. As a result of this improvement, the company reduced the waste volume of wooden pallets by approximately 10 tons per year. This activity was also recognized elsewhere and received the Distinction Award and Gold Award in the FY2016 Singapore Packaging Agreement Award.