Reduction of the Amount of Water Received in Business Activities

In response to rising concerns over water problems worldwide, Toshiba Group is promoting sustainable water resource management. Each of our production sites has incorporated the policy of reducing the volume of water received into its annual plan in order to develop specific strategies and conduct follow-up surveys on an ongoing basis. We are promoting wide-ranging initiatives including recycling the wastewater generated in sites and introducing systems for using rainwater.

Since Toshiba Group has multiple production sites in Southeast Asia, where water risks are relatively high, we will focus our risk management efforts on appropriately dealing with the issues of each region by promoting recycling of wastewater and using rainwater as measures for water-shortage problems as well as by raising the floor of main equipment and making other efforts as flood control measures.

Breakdown of the amount of water received (FY2020)

Case: Reducing the Volume of Water Used through the Effective Use of Rainwater

Toshiba JSW Power Systems Pvt. Ltd. (Toshiba JSW) has been reducing the volume of water used by utilizing rainwater and reusing treated water.
The company stores rainwater in a pond and uses the water for various uses, such as sprinkling water for plants in the premises, cooling water for manufacturing processes, and water for flushing toilets.
The rainwater storage pond is cleaned regularly so that the quality of water is maintained. The rainwater falling on the factory building roofs is not wasted either; the rainwater is once stored in the rainwater tank equipped with a monitor to grasp the water level. The monitor allows us to transfer the rainwater to the pond before it overflows from the tank. Through the use of rainwater, Toshiba JSW reduced 15,000 m³ water used annually.

Case: Reducing the Volume of Water Used through the Reuse of Cleaning Water

Toshiba Hokuto Electronics has succeeded in reducing the volume of water used by reusing wastewater. Specifically, wastewater from the pure water cleaning tank for substrates is reused for sprinkling water on the odor control scrubber. (This technology was co-developed with Toshiba Materials Co., Ltd.)

Toshiba Group is working to enhance analysis and management of production sites located in high-water-risk regions and sites that need large amounts of water. To analyze data on high-water-risk regions, we used "Aqueduct", a water risk assessment tool developed by the World Resources Institute (WRI), and we considered water problems from various perspectives, including the risk of pollution by wastewater and level of interest in water issues among area residents, in addition to the physical amounts of water resources in individual river basins.

Assessment of water risks in regions with sites

Working in collaboration with InterRisk Research Institute & Consulting, Inc., Toshiba Group selected eight production sites located in areas where water is used in large quantities or with high water risks to conduct water risk assessment at such sites. We assessed water demand (current demand and future trends), water disaster risks, and water contamination vulnerabilities (public health and ecosystems) from various perspectives in river basins where our sites are located. Based on the information acquired, we will review water risk prevention measures going forward.

Also, Toshiba Group is analyzing the correlation between the monthly amount of water received by factories and rainfall in regions where our sites are located. Assuming that months with small amounts of rainfall are periods with high water risks, we aim to contribute to water resource conservation in surrounding areas by reducing the amount of water received as much as possible.

By performing such an analysis at each site, we aim to contribute to water conservation in areas with high water risks as well as to raise awareness about water resources at sites in areas assessed as having low water risks.

Case: Reducing the amount of pure water used while the system is in standby mode

Japan Semiconductor Corporation Oita Operations manufactures mixed signal ICs and other semiconductors. During production, the plant uses many chemicals, all of which are appropriately treated in order to discharge wastewater that meets the various applicable standards. In addition, the plant uses wastewater to breed Japanese freshwater snails, which fireflies feed on, and has worked with local community organizations, local government organizations, and companies in the vicinity to release the snails in the upstream of the Kitabana River, thereby successfully breeding fireflies. (2014: Several fireflies ⇒ 2015: 1,200 fireflies observed) 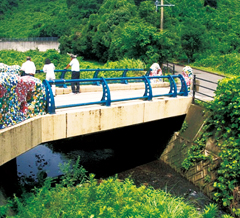