Reduction of Emissions of Chemical Substances in Business Activities

Toshiba Group strives to reduce the emission of chemical substances by designating substances that have large direct impacts on the environment as those targeted for reduction.

In FY2020, Toshiba Group took measures to address solvents used in cleaning and resin processing, which are the major emissions in terms of volume. We promoted initiatives such as using alternative substances and improving productivity and manufacturing processes in order to reduce the use of raw materials as well as reducing the evaporation of volatile organic compounds (VOCs) by enhancing chemical management. As a result, the quantity of chemical substance emissions per unit production was 84% of the FY2013 level and we therefore achieved our target.

Emissions of substances targeted for reduction and those per unit production

Breakdown of emissions of substances targeted for reduction (FY2020) 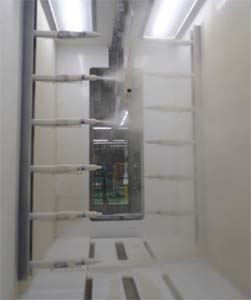 Toshiba Carrier Group has been manufacturing products with less environmental impacts by promoting reduction, substitution, and proper management of chemical substances. The group has multiple coating processes involving the use of paints and solvents that contain VOCs. VOCs such as suspended particulate matters and photochemical oxidants are chemical substances that are considered to be one of the causes of air pollution, and can be harmful to human health. A few years ago, Toshiba Carrier's Fuji Factory & Engineering Center began increasing the use of powder coating that use VOC-free paints, largely contributing to reduction of VOCs. Furthermore, powder paint that falls inside the equipment can be collected and reused as is. This has also reduced the waste of paints. In FY2020, the amount of VOCs used in the Fuji Factory & Engineering Center is expected to be reduced by 62% compared to the previous year, thanks to the introduction of powder coating for painting air conditioner casings. This is an example of how the group has been steadily reducing the emissions of chemical substances.

Case: Reducing the amount of chemical substances used and their emissions by introducing a multi-spot flow system 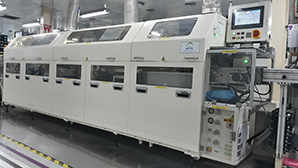 As part of measures to reduce environmental impacts, we appropriately manage chemical substances and continue to make efforts to reduce their use and emissions in manufacturing processes. In the regular circuit board manufacturing process, isopropyl alcohol (IPA) is used in the pre-treatment for soldering to clean the entire circuit board surface. However, in an attempt to reduce environmental impacts, since some circuit boards can be cleaned with partial coating, we have adopted a soldering system called "multi-spot flow" that reduces the amount of IPA used and its emissions when performing partial coating.
This system has already been installed at our manufacturing sites in China and other countries and we have achieved some results. In FY2019, P.T. TEC Indonesia introduced this system and reduced the amount of IPA used in the circuit board manufacturing process by 25%. Partially implementing this system also reduces the energy used to melt solder, thus contributing to global warming countermeasures.

Today, regulations on chemical substances are being made stricter in Japan and around the world and chemical substances used in manufacturing processes are required to be managed speedily and meticulously. We have therefore developed "TOCACHEF*1" to reliably deal with the increase in regulated substances and improve efficiency in reporting to the administration in compliance with laws such as PRTR Law*2. The system provides an electronic approval workflow feature to circulate applications for registration of a material within our company's internal departments concerned, which allows them to conduct and record assessments of such an application. Also, by registering all the chemical substances contained in the materials, the system allows you to automatically count and manage the amounts of such substances that are being used and transferred. The operation of this system has commenced at Toshiba Carrier Group manufacturing sites in China and Thailand as well as Japan, and we are trying to minimize environmental and safety risks and sharing materials across the entire Group by jointly using history data. 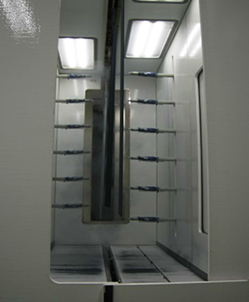 Toshiba Elevator and Building Systems Corporation had used xylene and toluene, which are regulated under the PRTR Law in Japan, as well as solvent coatings that contain volatile organic compounds (VOCs), including butyl acetate, which is a second-class organic solvent specified in the Ordinance on Prevention of Organic Solvent Poisoning*1. As an alternative, the company adopted a powder coating that contains none of these substances. It thus greatly reduced the environmental impact on the atmosphere caused by organic solvents (reduction of 3 tons *2 per year).

The new coating is friendly to human health and contains no formaldehyde, which is a major causal agent of sick building syndrome.

*1
Industrial Safety and Health Act, Ordinance on Prevention of Organic Solvent Poisoning in Japan
*2
Based on FY2015 results