Contribution by Products and Services Associated with Power Consumption

With regard to product groups such as air conditioners and LED lights for which CO2 emissions during use account for the largest percentage of emissions generated throughout product lifecycles, improving energy-saving performance leads to significant reductions in CO2 emissions. Toshiba Group helps reduce CO2 emissions by developing and providing advanced energy-saving technologies.

Power semiconductors are used everywhere involving the conversion of electricity, but some power is lost as heat during conversion. The causes are broadly divided into conduction loss and switching loss, which are in a trade-off relationship. Toshiba's high-performance power semiconductors have succeeded in lowering this dichotomy of loss in a well-balanced manner through a variety of innovations. In recent years, silicon carbide (SiC) and gallium nitride (GaN) have been put into practical use as high-performance semiconductors with low loss, which could not be achieved with silicon. However, as they are expensive, they are used only in applications with large benefits such as railways and wireless base stations. Silicon power semiconductors are likely to continue to be used in many products. U-MOS X series and DTMOS VI series are state-of-the-art silicon power semiconductors that enable high efficiency in many electric devices in households, and contributes to the energy savings of equipment using those devices. 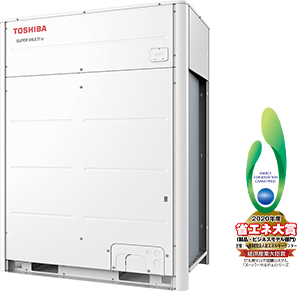 Today, building owners are facing situations where they need to replace air-conditioning systems in their building not only because they are old or out of order but also they need to comply with energy regulations or guidelines that are getting more stringent overtime. This series was developed based on the concept of combining “compact and energy-saving” and “new solutions for reducing the Life Cycle Cost (LCC) of building-use air-conditioning systems.” The world's largest capacity triplet rotary compressor and the world's first dual-state inverter that allows to switch between connection motor drives are key innovations adopted for this series to cover a wide operating range while attaining high efficiency. This series has accomplished the industry's highest annual performance factor (APF) for 18 and 20HP models while using one of the smallest chassis in the industry. As a result, it won the Minister of Economy, Trade and Industry Prize, the highest honor at the 2020 Energy Conservation Grand Prize for excellent energy conservation equipment. The series has also been certified as an Excellent ECP* for FY2020. 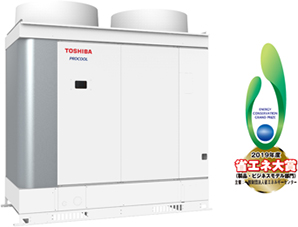 In response to today's growing needs for the cold chain, we have developed the PROCOOL series of large condensing units. This product demonstrates high energy-saving performance for use in refrigeration and freezing facilities, such as cold warehouses and food processing factories, as well as for use in refrigerated and freezer showcases at drug stores and food supermarkets.
With improved motor performance during low speed compressor operation thanks to the adoption of a PWM*1 converter, our development of the world's highest capacity DC twin-inverter rotary compressor with excellent partial load*2 characteristics, and adoption of an air heat exchanger specifically optimized for high-capacity blowers and the refrigeration cycle, this condensing unit achieves the industry's highest class of efficiency during operation under partial load. The technology of this product, which can operate at extremely high efficiency throughout the year, was highly evaluated, which resulted in it being awarded the Chairman Prize of ECCJ at the FY2019 Energy Conservation Grand Prize for excellent energy conservation equipment. The PROCOOL series of condensing units has also been certified as an excellent ECP*3 for FY2019.

*1
PWM: Pulse Width Modulation, a modulation system used for power control.
*2
Partial load: A state in which the device in question is not operating at maximum output.
*3
Our products and services that have the highest level of environmental performance in the industry upon release. 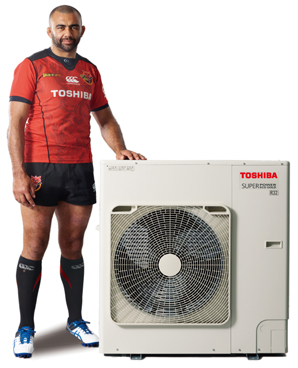 In recent years, unusual weather such as an extreme heat wave and harsh winter or a cold wave is often being observed in many parts of the world. In this circumstance, depending on the installation condition of an air conditioner outdoor unit, we can anticipate a risk that the cooling capacity may drop during peak hours in an extremely hot day or other risks.
As such, we have developed this product that achieves high efficiency with a newly developed DC twin rotary compressor featuring high output and increased shaft rigidity owing to optimized design for a four-axis motor and others, enabling operations in the widest outdoor unit temperature range in the industry*1. While ensuring toughness to withstand the extreme heat wave and harsh winter, this product has not only cleared the 2015 standard of Japan's Energy Saving Act, but achieved a high annual performance factor (APF) and thus the industry's top level high energy saving performance. As a result, this product was certified as an excellent ECP*2 for FY2018.
Furthermore, the product reduces the burden of transportation and installation work in the field by making the outdoor unit smaller and lighter with a compact compressor, light heat exchanger, and single fan. Moreover, the product uses the new refrigerant R32 featuring approximately one third smaller the Global Warming Potential (GWP) than conventional refrigerants and is environmentally conscious in many aspects.

*1
The lower limit minus 27℃ to the upper limit 50℃; in store and office air conditions; a survey by Toshiba Carrier Corporation.
*2
Toshiba product or service that has achieved No. 1 environmental performance at the time of market launch. 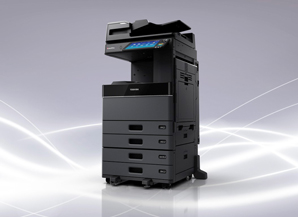 Amid rising interest in various environmental requirements worldwide, Toshiba Tec Corporation has been working on energy saving, saving resources, and reduction of chemical substance used in MFPs.
A fixing device is the component that plays an important role in increasing energy saving performance in MFPs. In an MFP, a toner stuck on paper is warmed, melted, and fixed with a fixing roller. Here, the important point in improving energy efficiency is how efficiently the fixing roller can be warmed. Our e-STUDIO5015AC series color MFP achieves energy-saving by improving the heat conductivity of the fixing component and using a low temperature fixing toner. As a result, the e-STUDIO5015AC achieved the top-level typical electricity consumption (TEC) value, which is an energy saving standard for MFPs used by the International ENERGY STAR® Program and was certified as an excellent ECP for FY2018. From the viewpoint of resource saving, it also achieves 8.5% in the usage rate of recycled plastic materials by utilizing high post-consumer recycled materials.