Toshiba Group has been proactively installing systems to capture and/or remove sulfur hexafluoride (SF6), which is used to insulate heavy electric machinery, and perfluorocarbons (PFCs), which are used to produce semiconductors. By steadily taking measures to improve our production processes, the Group is working to reduce the total volume of GHG* emissions generated from our business activities . In particular, to reduce energy-derived CO2 emissions resulting from the use of electricity, we are making efforts to proactively adopt energy-saving measures at our production sites, including those overseas, to improve production efficiency, as well as to introduce renewable energy.

In FY2020, total GHG emissions were 1.05 million t-CO2, so we achieved our target of 1.66 million t-CO2. Energy-derived CO2 emissions per unit activity were 92% compared to the FY2013 level. Although total GHG emissions have remained almost flat compared to the previous year, per unit activity improved as a result of investment in high-efficiency equipment and other efforts.
Renewable energy accounted for 0.08% of total energy consumption.

Going forward, Toshiba Group will contribute to the realization of a decarbonized society by working to significantly reduce GHG emissions through the promotion of measures such as expansion of the use of renewable energy at our sites worldwide based on our long-term GHG emissions reduction target. As a new initiative under the Seventh Environmental Action Plan, Toshiba Group will also focus on the reduction of GHG emissions through the use of its digital technologies that enable remote operation, automation, and intelligence.

Energy-derived CO2 emissions and those per unit activity

Case: Reduction of Power Consumption by Installing an Inverter in the Scrubber Circulating Pump

Kaga Toshiba Electronics Corporation installed an inverter in the circulating pump used in scrubber equipment. This reduces excessive circulating water and cuts energy used in the pump for that purpose. 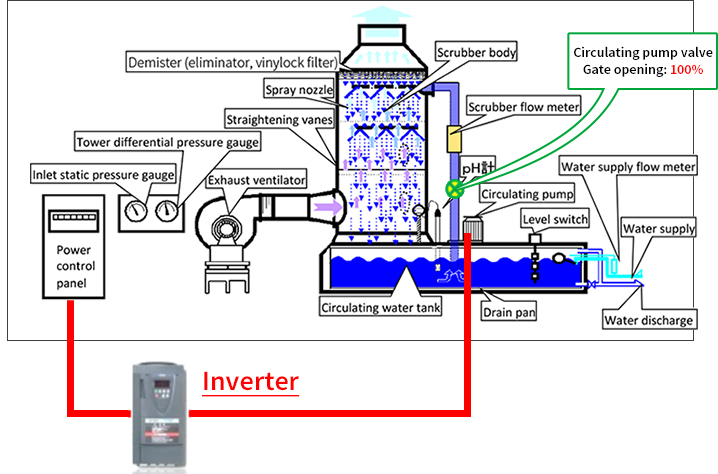 Case: Use of Carbon Neutral LNG at Toshiba Group

Toshiba Group is a member of the Carbon Neutral LNG Buyers Alliance and started using Carbon Neutral LNG (CNL) in Fuchu Complex and Komukai Complex for the first time within Toshiba Group. CNL is a type of LNG that offsets greenhouse gases generated in the process from extraction to the burning of natural gas by carbon credits (carbon offsetting) obtained by projects that help conserve biodiversity and reduce poverty in emerging countries. Thus, it is deemed to be carbon neutral on a global scale even when burned. Toshiba Group will contribute to the realization of a sustainable society by responding to climate change and other social issues through increasing the use of CNL.

Construction of the new technology building "e-Third" at Fuji Works of Toshiba Carrier Corporation was completed in January 2020, and the building was put into operation in May. We position "e-Third," our evolution + Technology hub of R&D, as the core of our technology development, which stretches around the world; at "e-Third," we conduct research and development of products and solutions for global markets.
Since many engineers work at the multiple laboratories of "e-Third," many kinds of equipment and technologies have been installed to achieve a comfortable working environment and energy management. In addition to using high-efficiency devices, more than 600 sensors (image sensors, radiation temperature sensors, temperature sensors, CO2 sensors, etc.) have been installed on all floors (from the first to the fourth). Based on the information obtained from these sensors, human body sensor lighting is toggled ON and OFF, the air flow from the AHU* is controlled according to the CO2 concentration, ventilation ducts are controlled to suit the temperature, and natural ventilation windows are opened and closed.
In this way, the entire building achieves comfort and conserves energy in the optimal manner.

Our Fuchu Complex was certified as a Top-Level Facility by the Tokyo Metropolitan Government for outstanding global warming countermeasure efforts. The certification reflects the recognition of its long history with the completion of the building in 1940, a large-scale facility in the manufacturing industry with solar power generation and high efficiency production facilities, control of peak power and power usage by using the power monitoring system, "Demand EYE," participated by all employees, and so on.

In addition to these efforts, Fuchu Complex has been working on other various global warming countermeasures toward the achievement of "Zero Emission Tokyo" promoted by the Tokyo Metropolitan Government, which includes: weeding by goats and sheep; promotion of demonstration experiments at a hydrogen utilization facility; and the zero emission building (ZEB) concept for buildings and offices under Fuchu Complex Next Plan*. 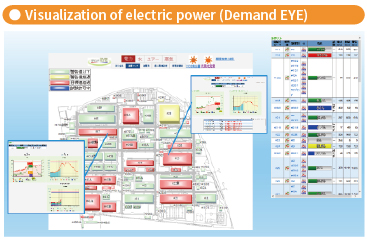 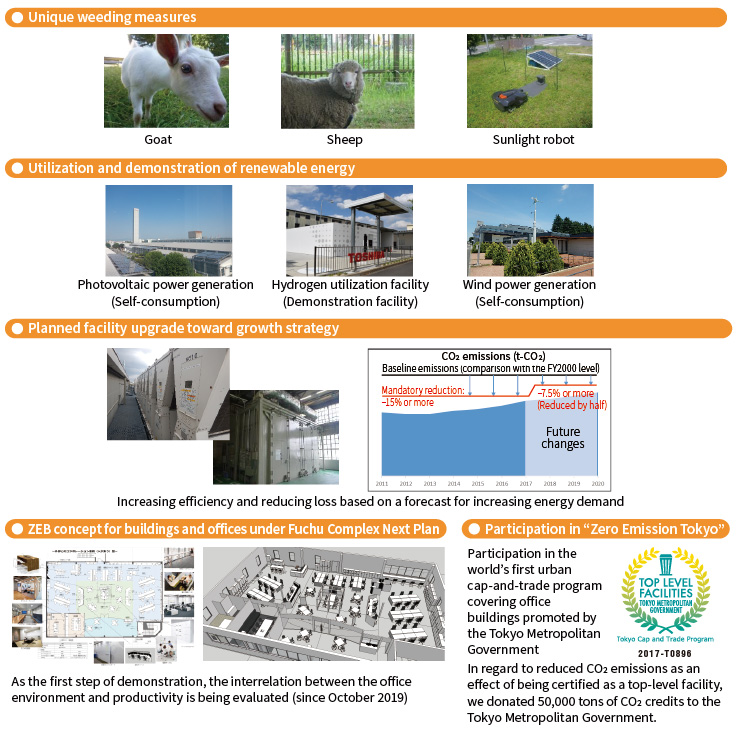 In our pretreatment process for coating of compressor line, we apply degreasing and chemical conversion coating* as a treatment for the coating surface. In these degreasing and chemical conversion coatings, the degreasing liquid and chemical treatment liquid must be used after heating. Previously, we utilized steam generated from a factory boiler by the heat source. By installing our "CAONS 140 circulated heating heat pump system" to convert the heat source and discontinue the use of steam, we succeeded in reducing CO2 emissions by 310 tons per year. By also introducing various energy-saving measures, we succeeded in achieving a reduction of CO2 emissions by 540 tons per year for the entire coating pretreatment. 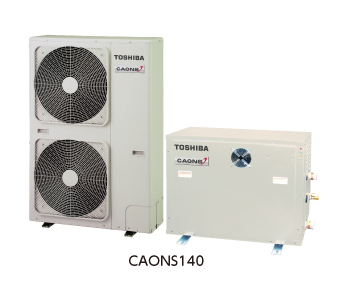