IT trends A world that will change through communication AI

The near future where AI becomes commonplace

The acronym AI (or artificial intelligence) has become known by a wide spectrum of people, from children to the elderly, to the extent that a day doesn’t go by without hearing something about it. The world is overflowing with a variety information about AI, and it already feels as though a world where we co-exist with machines that have a level of intelligence that seems human-like (AI robots, etc) is already being realized. Even in business, we now commonly hear people talk about their expectations of AI: “Let’s use AI to raise work efficiency”, “Let’s develop a new product using AI”.
A society where the physical (real world) and cyber worlds are linked together (CPS) aims to make use of new value, which is created by collecting various data from the real world and analyzing it in the cyber world, in improving everyday life and industry.At the same time, CPS creates a complex world where there’s an overflow of enormous amounts of data. The idea of giving AI the job of organizing and making selections within this enormous amount of information and judging within complex situations is said to be the natural way forward. If complex data processing can be entrusted to AI to allow people to concentrate on the work they do best, not only is work productivity likely to rise rapidly, it will also raise each person’s self-fulfillment and value of their work and also greatly help in allowing businesses to sustain themselves during the present-day issue of lack of staff. If AI can be used in scenes which require advanced abilities to understand situations and the judgement of experts, the know-how of these experts will not disappear, and anyone will be able to use it at any time. Even in workplaces with a diverse workforce of differing work experience, skills and nationalities, advanced business activities can constantly be sustained and accomplished. The expectations of this will also broaden.
In addition, the “digital native generation”, who have been living with the internet, smartphones and social media since they were old enough to remember, will become the main breadwinners of society in 10 years from now. It can be imagined that society then will make use of AI naturally and without suspicion of its output in workplaces and in business decision making. 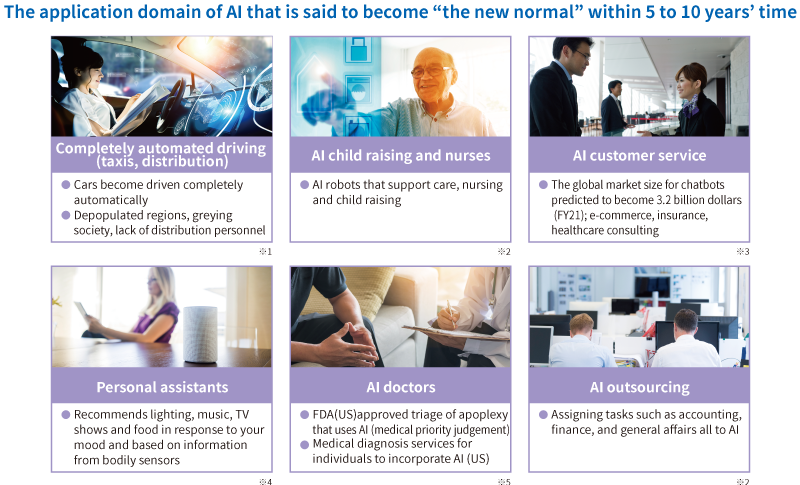 Values that change through the deepening of AI

As AI deepens and develops further, what will become of people’s relationship with AI?
Ray Kurzweil, who advocates the concept of singularity, predicts that “AI will reach the intelligence level of humans within 15 years, and within 25 years (2045) it will surpass humans’intelligence and intellectual power*6.The late famous cosmologist Professor Stephen Hawking said that “Once humans develop full artificial intelligence, it will take off on its own and redesign itself at an ever-increasing rate. The development of full artificial intelligence could spell the end of the human race.*7.Bill Gates, the founder of Microsoft, has said that “inviolable rules that humans have will become insignificant.*8.Many intellectuals around the world have sound the alarm that AI will surpass human intellect and threaten our existence.
A glimpse of this can already be seen in the AI of today.
First is the manifestation of systems that have no human intervention. The overwhelming calculation power of AI has defeated the world champions in chess and go, and we are already in an era where the strongest AI compete against each other. Similarly in global financial transactions, high speed parallelized transactions between advanced AI systems are being realized from transactions based on heuristics and know-how from humans. If mechanisms like blockchain can become more widely used, the areas where humans intervene will likely decrease markedly.
Next, the development of AI algorithms has allowed completely new rules to be “created” by AI without needing to have large amounts of correct data. Previously, AI would study millions of cat photos to decide whether something is a photo of a cat or not. The AI of today can create learning models that, just like how a human child learns, can use only several photos of cats to figure out itself what a cat is and isn’t. We will also see the potential of systems that, from just a small amount of correct data, generate their own models that improve the system and that can evolve themselves.
Lastly is “things becoming functions”. For example, once automated driving becomes more advanced and more acceptable in society, the value of cars will essentially change from being “something you own and control” to “a function you use when you need to travel somewhere”. The physical business of automobile manufacturing and selling will dramatically switch to the cyber business of travel services, and it’s likely that the major players of the industry will essentially change into service providers.
With the establishment of AI being focused in social systems, industries and businesses, it’s probable that considering and planning designs as a whole and rethinking work processes from their foundations will be necessary.

Nevertheless, the expectation that AI can solve anything you throw at it is unfortunately, as of present, largely separate from reality.
What present-day AI is good at is simply classifying information. If there’s a lot of necessary data, AI has the power to diversely dig up possible answers from that data, classify it at a higher precision than humans can, and offer information that can lead to making the optimal decision.However, in the actual workplace, the amount of data needed to teach AI so it can perform sufficient classification has not yet been collected.
For instance, in many workplaces that feature sales activity, maintenance inspection, customer service, or care and nursing, people in many cases are occupied both in operations and more detailed work. For these people, even if they want to record on their mobile devices what’s happening on the floor or what they notice in a timely manner, the fact that they can’t record things when they need to due to the difficulty of doing everything by hand means there’s a barrier to information input. Also, records written down in sentences and in manuals won’t necessarily take into account the expertise and detailed know-how of experts.
There becomes a sense that you can’t empathize with what the AI subsequently outputs and that output cannot be accepted so readily.

A world where there’s a connection between people and AI

The Toshiba communication AI “Recaius” is a technology that breaks through this issue. It can understand the utterances and behaviors of people and, based on the intention inferred from that, convey necessary knowledge clearly to support the activities of people.
Recaius firstly places importance on lowering the barriers to information input in the workplace. Just by turning to the Recaius AI app and talking to it naturally, it’s able to input information such as what’s happening in the workplace currently and what has been noticed, and this is all realized through a voice input and output interface. By using natural spoken language in a handsfree way that avoids having to stop doing a particular job, anyone is able to record their situation. In a workplace where multiple people work in different roles, Recaius can leave a record of the communication between people and between people and systems; this includes information such as when and how employees talk to each other and what happened during that time.
Recaius understands the intentions and states of people’s talking and behavior from voice and video data and gives feedback from the knowledge it has gained. In this way, it supports the activities of people in a variety of cases in everyday living and on the job.
Recaius lends a hand in the first step towards more thoroughly utilizing the power of AI through its ability to gather good quality raw data from the workplace, which was difficult to gather before. 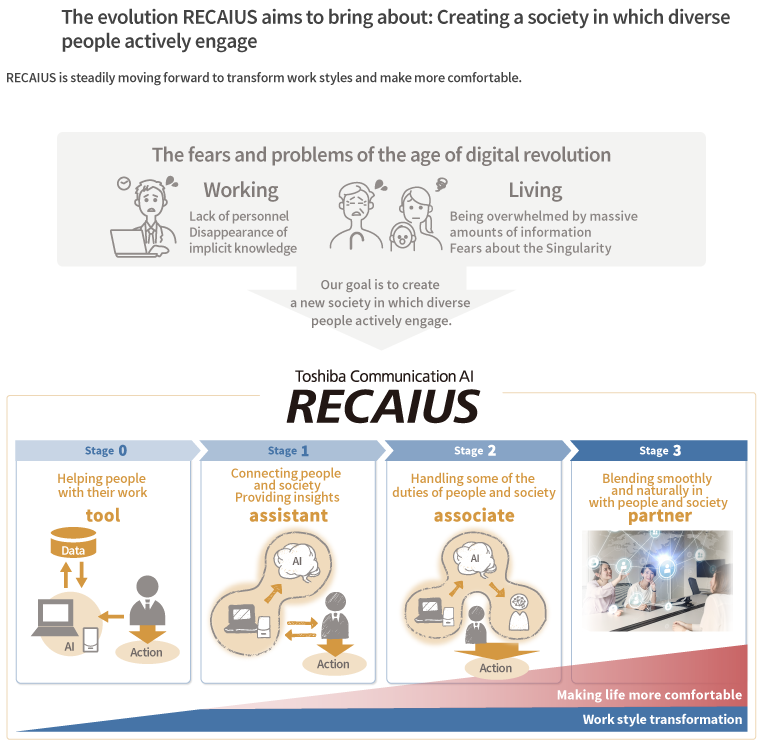