Fusing the physical and cyber worlds together to create new value

As the digitalization of industries currently begins to accelerate around the world, Toshiba has announced their new vision for the year 2030 of “aiming to become one of the world’s top CPS technology companies”. 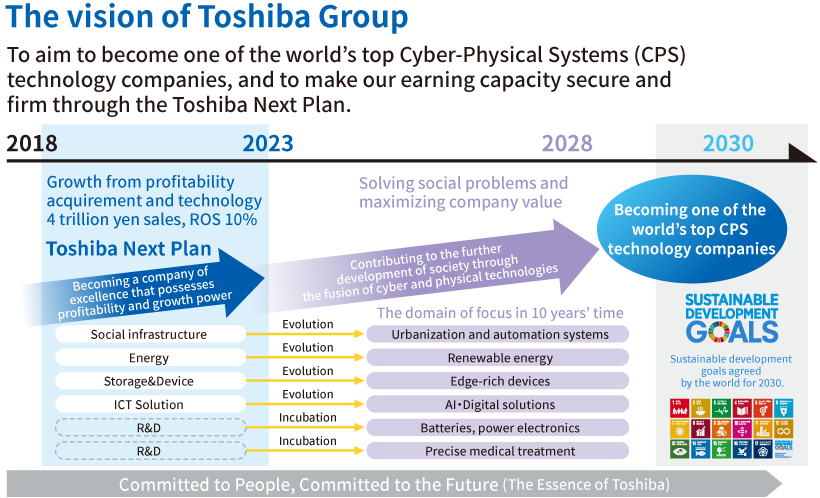 Looking back at the era from the end of World War II to the modern Heisei era, we’ve moved from a time of improved productivity and high economic growth that was thanks to mass production, mass consumption, and automation driven by a material civilization and the accumulation of people, things, and money, to a time where new connections thanks to the internet, the digital revolution, the turning of things into software, and the effects of networks have brought about the creation of new wealth and its uneven distribution. The Reiwa era from here on is set to become a world where people, things, systems and society are all connected. Automated driving, autonomous control, robots and drones, AI, and Cyber-Physical Systems (CPS) will continuously be implemented by society, and with data becoming a resource, increases in the innovation and productivity of business models due to digital will likely be accelerated even further.
In this era called the Fourth Industrial Revolution, which will see industrial structures go through a change where they will dramatically switch over, Toshiba, as a company of craftsmanship that has operated for around 140 years and also as a company that is not just an IT company but a company that knows craftsmanship and how things are used, will provide customers and society new value born out of the fusion of the physical and cyber worlds in the life and society-supporting business fields of social infrastructure, energy, retail, and craftsmanship, and this will be done to contribute to the realization of a sustainable society.

In looking towards a new era where the growth model for the economy and businesses largely differs from that of previous, in order to create a workplace where a company’s business field and technological strengths can manifest, a company will need a “map” that accurately grasps the cyber and physical realms and depicts that structure. This is the “architecture”.
Toshiba has been early in imagining an architecture for the CPS era: “Toshiba IoT Reference Architecture (TIRA)”. TIRA digitally grasps the various phenomena that occur in the physical world, collects them into the cyber world, and through various analyses and algorithms allows optimal control. In addition, by combining this data with other data and offering them as a digital service, new value can be created, and also by connecting other systems and people flexibly and comfortably, the creation of even more value is aimed for.
While following the global standards of reference architecture such as IIC, NIST, and Acatech, and from the added perspective of SoS (System of Systems) that describes further connections with other systems and the perspective of IoP (Internet of People) that describes connections with people, TIRA offers a more comprehensive “map” in looking towards a coming world where everything is connected.
With TIRA the development and maintenance of various software sets or the usage of external software has begun, and Bus and AI bases that are at the heart of IoT services are also being maintained. By referencing common architecture, open collaboration that goes beyond the barriers of companies and departments is accelerating.
The thinking behind the forward-looking TIRA is adopted in Ver 1.9 of the IIC reference architecture “IIRA” in 2019, and it will be described along with example applications in the next version of IIRA. Toshiba has begun to lead the global IoT standard from Japan.

Toshiba is continuously offering an IoT service developed and maintained with TIRA in the fields of energy, social infrastructure, building facilities, and craftsmanship. This is Toshiba’s IoT service TOSHIBA SPINEX™.
For example, in the field of energy, Toshiba is offering as cloud services energy-optimized functions that are a concentration of expertise based on the energy devices, control systems and plant operations they’ve so far supplied to energy plants. Through this, advanced energy IoT services based on a rich track record can be used more easily.

In the field of social infrastructure and building facilities, Toshiba offers new IoT services for buildings through initiatives in low energy, low cost, and imagery sensors that are achieved through optimal operation of industrial and building equipment.
In the field of craftsmanship, Toshiba has turned the “Meister Series” craftsman IoT solution, which sees frequent use by our various manufacturer customers, into a cloud service. By offering through the cloud, usage becomes easier for companies and departments that find IoT implementation difficult, and also cross-usage along the value chain - suppliers, selling partners, maintenance support partners, and contractors - becomes possible. In an easy-to-implement cloud environment, it’s possible to begin the application functions of the Meister series that adopts Toshiba Group’s experience and expertise in craftsmanship. These involve the usage of IoT in realizing thorough traceability and the diverse visualization of phenomena that occur in the workplace through the perspective of 5M1E.

Toshiba’s approach of “DE” and “DX”

In aiming to become a CPS technology company, Toshiba is working on both digital evolution (DE) and digital transformation (DX). For DE, we will evolve the hardware we have made over many years using the power of CPS. On the other hand, for DX, we are forming ecosystems together with our partners and creating a new business through a platform that offers new value to our customers.

Toshiba will concentrate the craftsmanship expertise, control and system technology, and optimized technology that they have cultivated over many years into CPS technology. In various industries, Toshiba will aim to optimize the operation, control, maintenance and production of equipment and plants, and in looking towards transforming customers’ businesses and work, we will together open up a new era using CPS technology.